Yes I’ll admit my desire to see Tuscany comes from watching Under The Tuscan Sun too many times. The dreamy countryside, the olive groves on the side of the hillsides, the old villas, italian romeo’s…. So imagine actually getting to go to Tuscany. 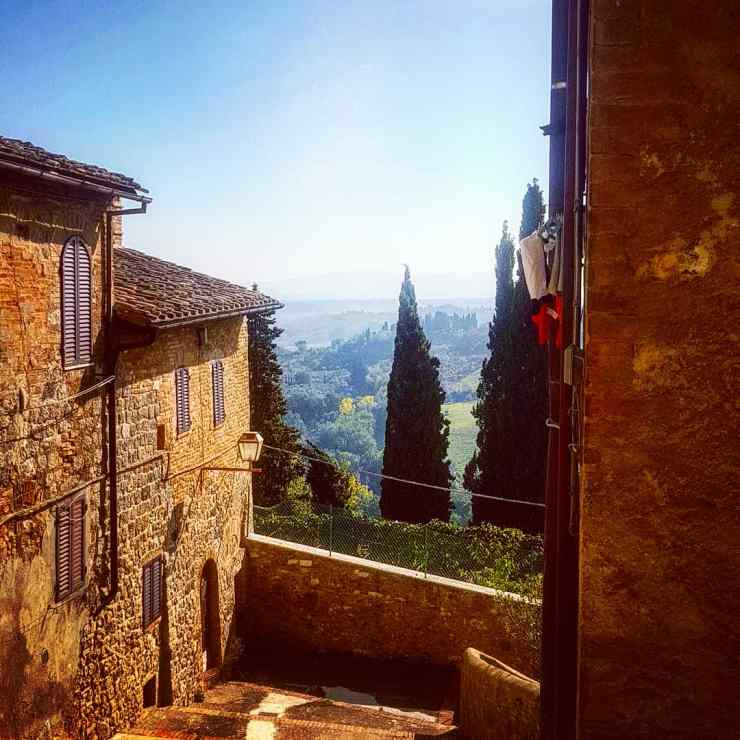 The drive from our village in Pianiga didn’t exactly go well. Hating to pay tolls and hating main highways we do try to travel as often as we can on the secondary routes. I had done a little research as to where to head but in all honesty not as much as I usually would have. I think being in Croatia so long where you just follow your nose along the coast has made me a bit lazy in the research department. Anyway somewhere I had read Emilia Romagna was a small town for foodies so I Google mapped it and away we went. Well Emilia Romagna is not a small town, or at least the one we went to wasn’t, infact it’s just a few metres from Bologna itself so pretty darn huge. Pretty darn huge with lots of one way roads or lanes that run through the centre of these busy,  busy streets. Are you getting the picture… yep LOTS of bad bad words came out of the driver’s mouth. All the while I’m trying to navigate our way via the GPS lady and she keeps sending us down more roads not suitable for motorhomes.

Finally after some tense moments where I could see our motorhome ending up as an Italian monument in Bologna, we found our way onward but completely away from any secondary road, probably more fourthly – is that even a word?#? – road and so our trip to Tuscany with the imaginery lovely foodie stop inbetween, took 8 hours to drive just over 200 kms. We actually only ate mandarins, our whole mandarin supply that day. 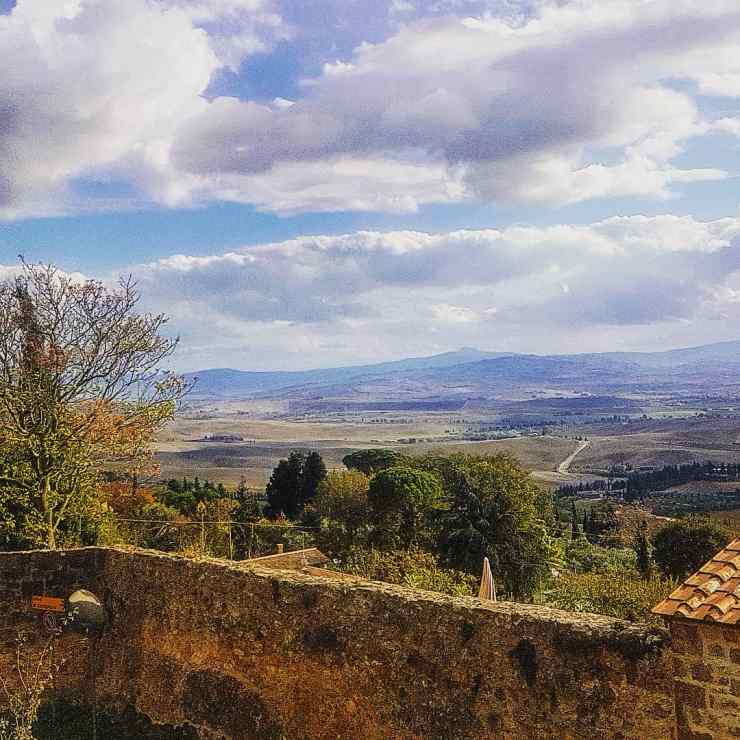 We headed for our first Tuscan town just before dusk and even that turned interesting. San Donato like most Tuscan towns is built on a hill overlooking the valley’s below and they are old historic towns inside high walls like fortresses with gates at either end, mostly big enough for a small car. So the Park4night app sends us through the middle of town to the church grounds. You should have seen the faces of the old boys enjoying their nightcaps at the local bar as suddenly a large motorhome comes climbing over the hill towards them. Priceless. 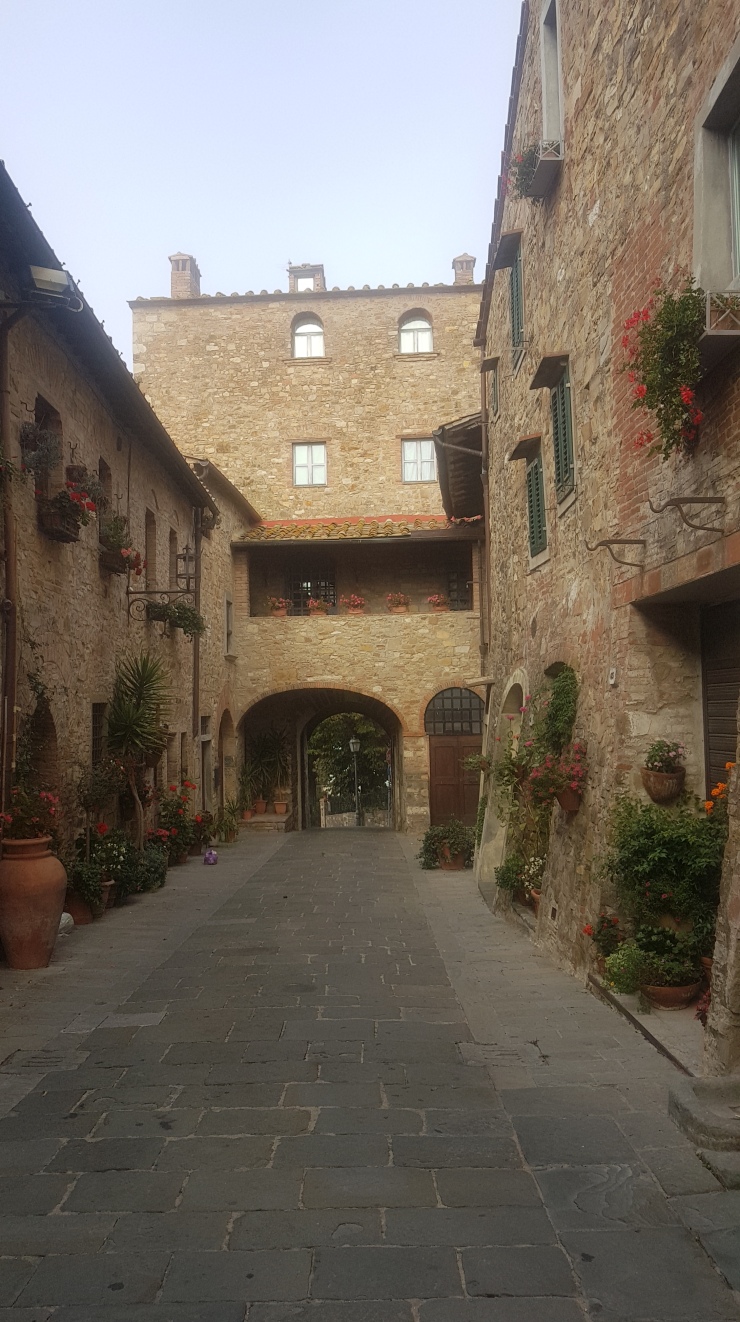 After a great night’s rest, amazing how that can change the vibe of the day and a bit more research from me, we headed off to San Gimignano, a very touristy but beautiful Tuscan town. These towns are medieval, all built high on a hilltop, surrounded by city walls with a panoramic view of the approaching enemy. What a laugh that now that panoramic view is only used for Instagram shots. 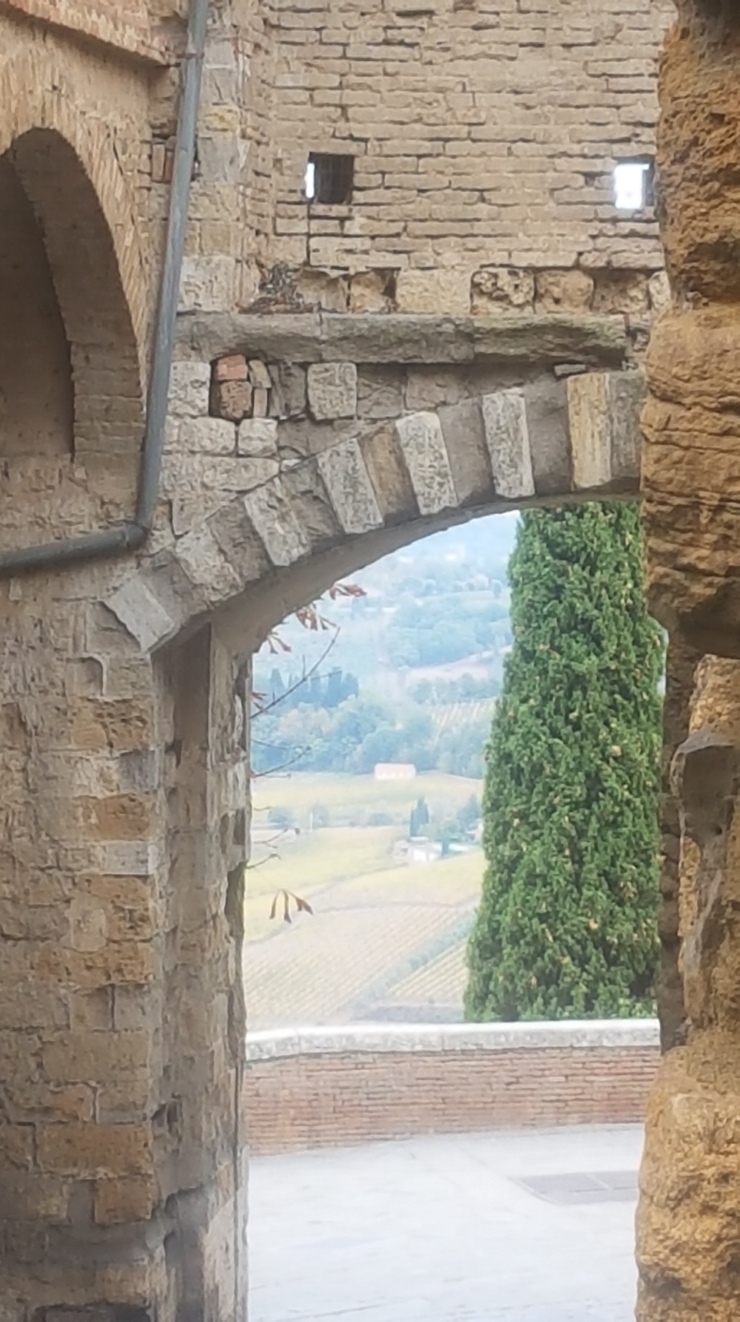 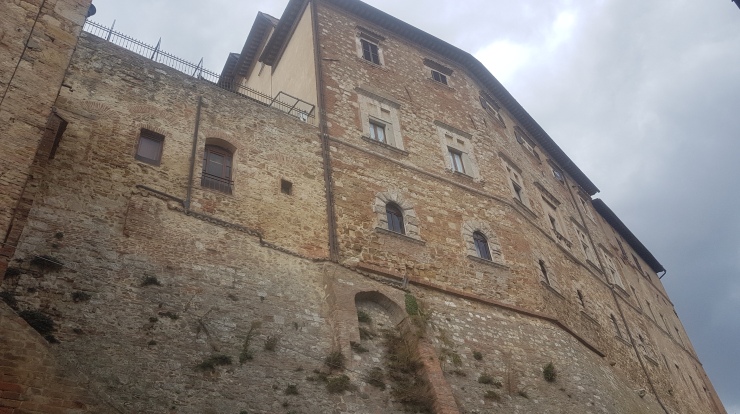 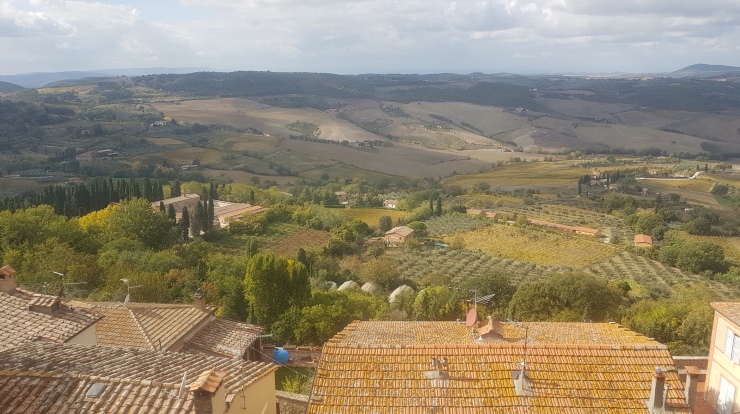 Like all of the Tuscan towns you will see more wine, cheese, and salami than you could ever hope to see and because there is so much competition, everyone has free tastings on offer.

The pecorino cheese is my favorite however you need to see what it’s actually been rolled in before tasting. Chilli, ash, crushed walnut leaves with hay that looks like it came our of the pig sty… 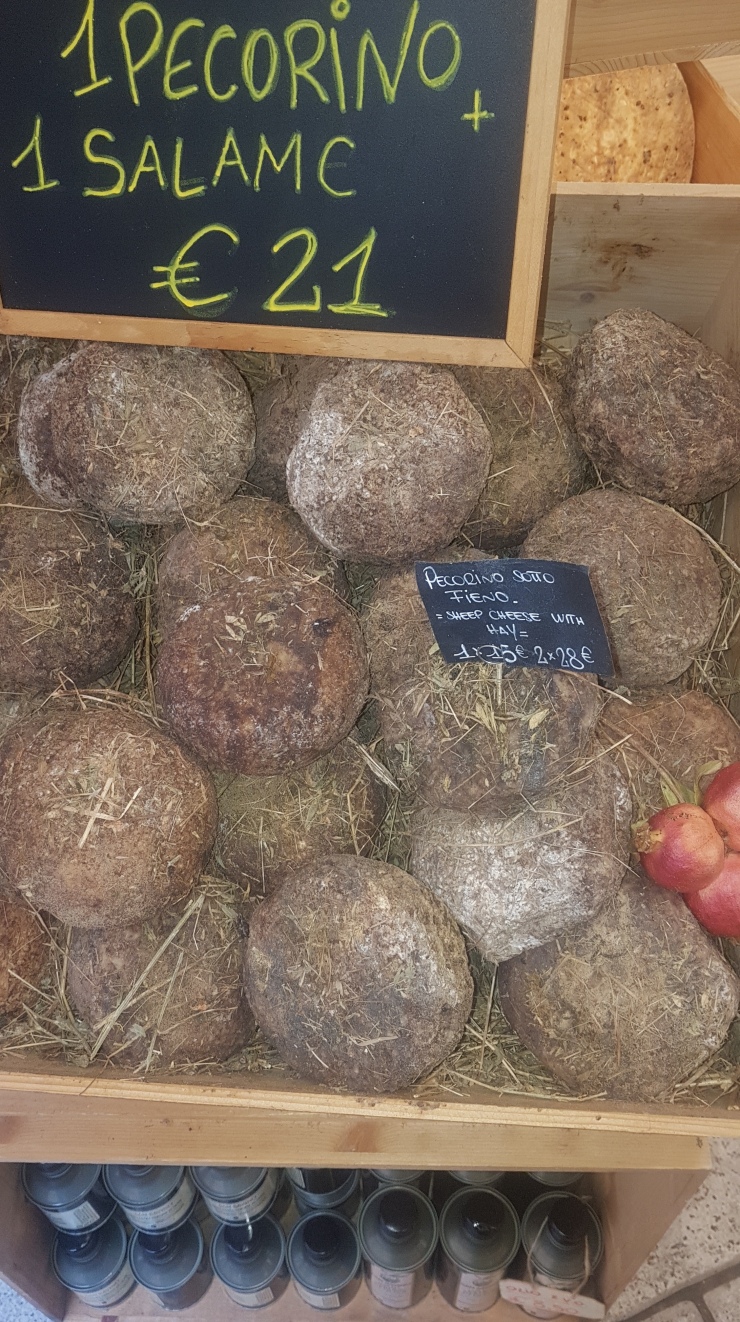 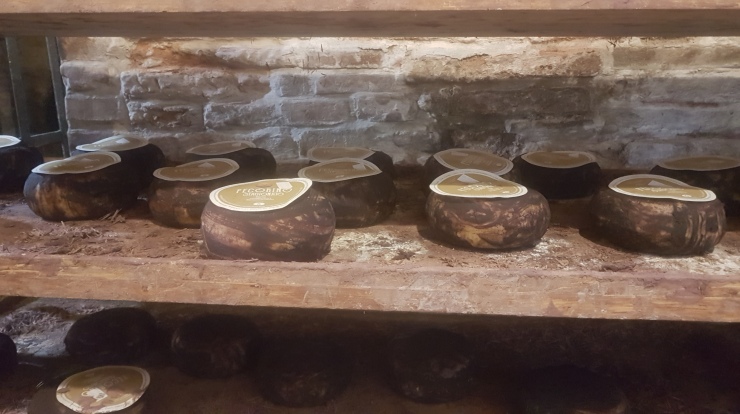 Even though I find the souvenir shops and the tuscan plate shops and the leather handbag shops a tad monotonous, I just can’t get enough of these gorgeous old, old towns and the views of the countryside. Please tell me why all the paddocks as far as the eye can see are dug up? I googled it but it told me the wild boars did it. 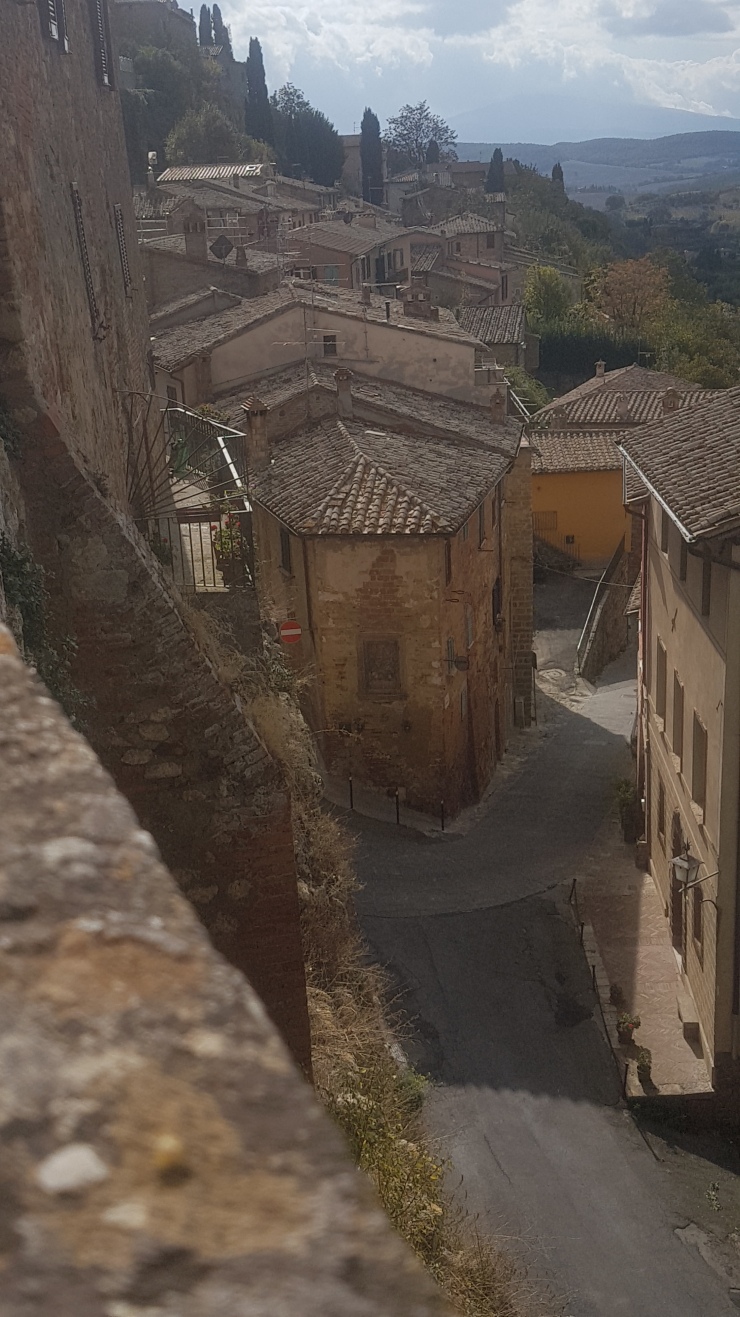 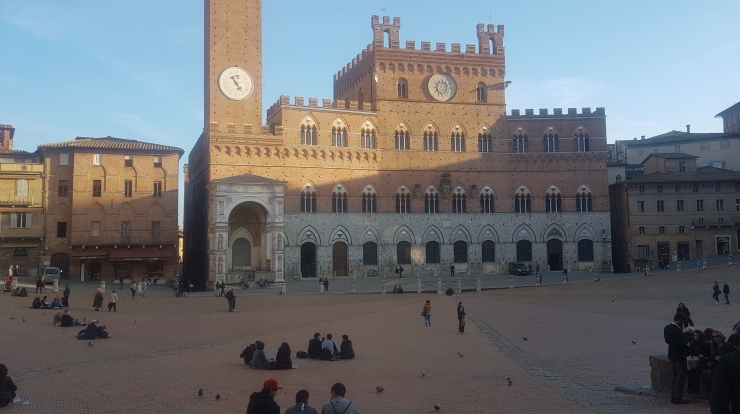 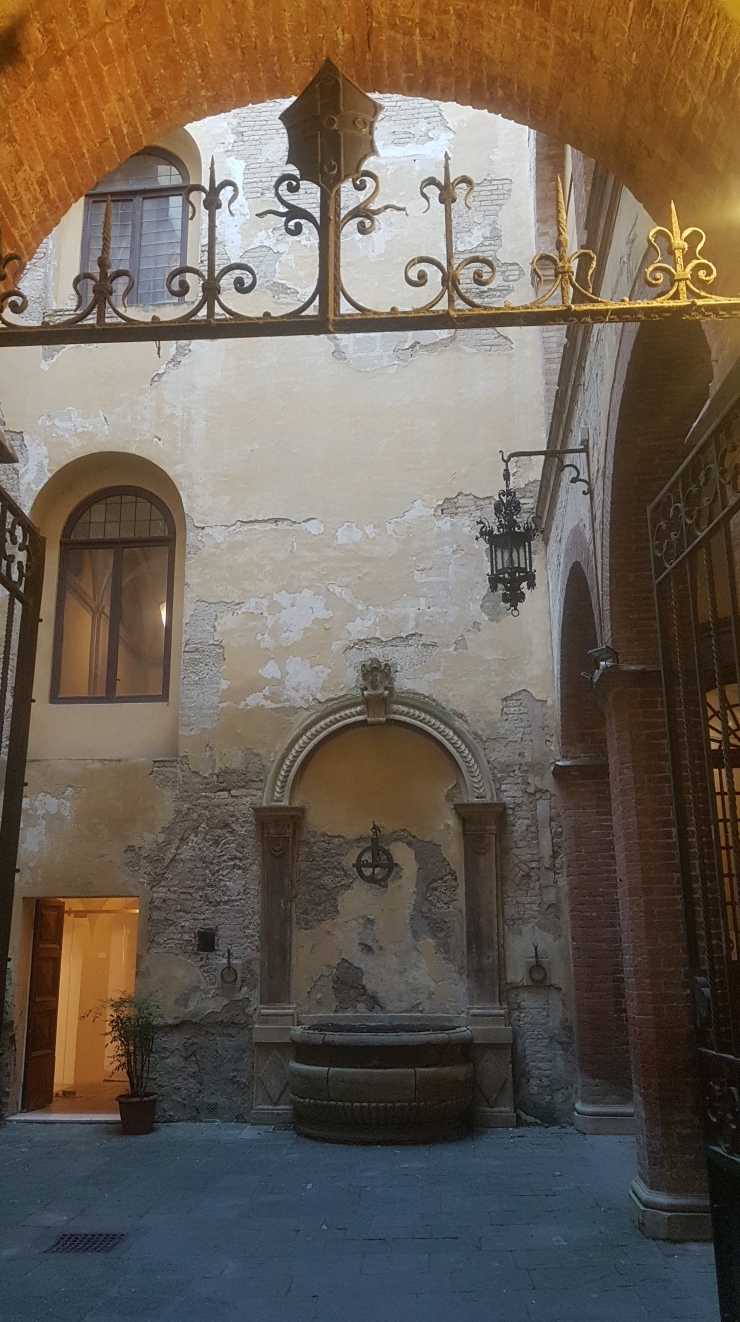 The architecture in this city is really something else and the streets in where they actually allow cars and buses into are as steep as they come. It’s  pure entertainment watching them boost full throttle up the hill before breaking heavily to round the corner at the top which is basically a lane filled with people. 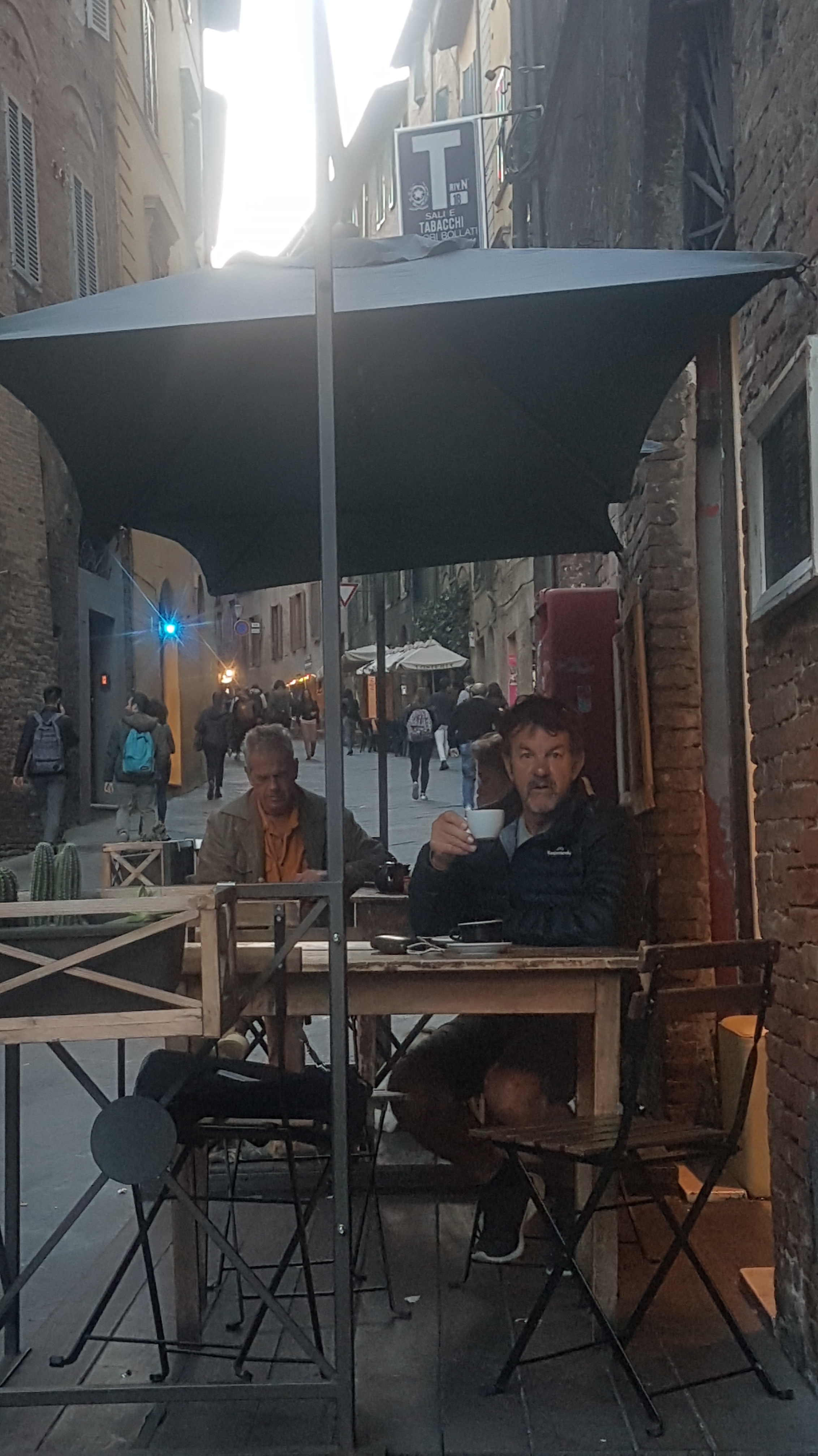 This is us watching the cars come around the corner whilst drinking coffee. Yes they have to drive past us.

For anyone visiting Tuscany, Sienna is a must. We ended up staying in the carpark- not our favorite thing – but it was dark when we left Sienna so not worth the hassle of moving on.

I chose 3 towns for today’s explorations. Montepulciano, Pienza and Montalcino. Montepulciano is the town where one of the Twilight Movies was filmed, so we expected busloads of Twilight fans, yet the town was strangely quiet and it was lovely to wander the streets and imagine life in a real Italian town minus all the tourists. These gated fortress towns are unimaginably beautiful. 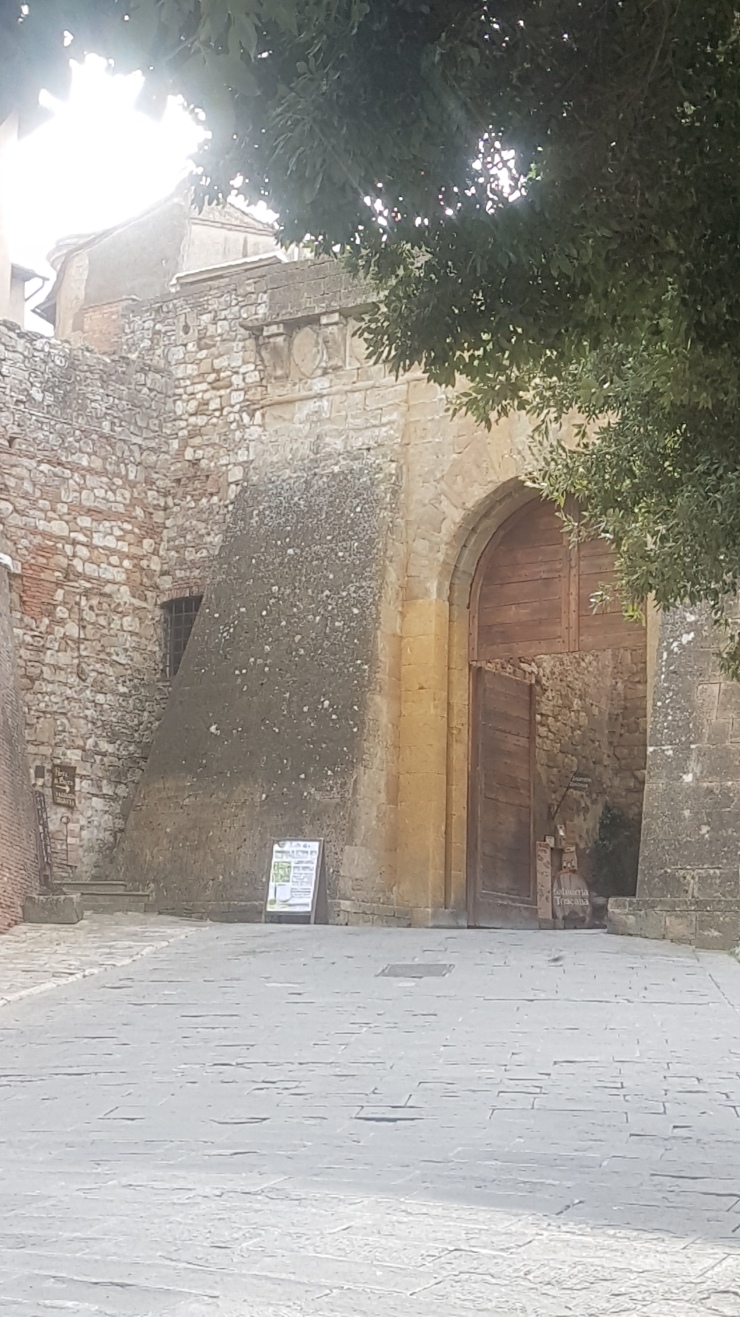 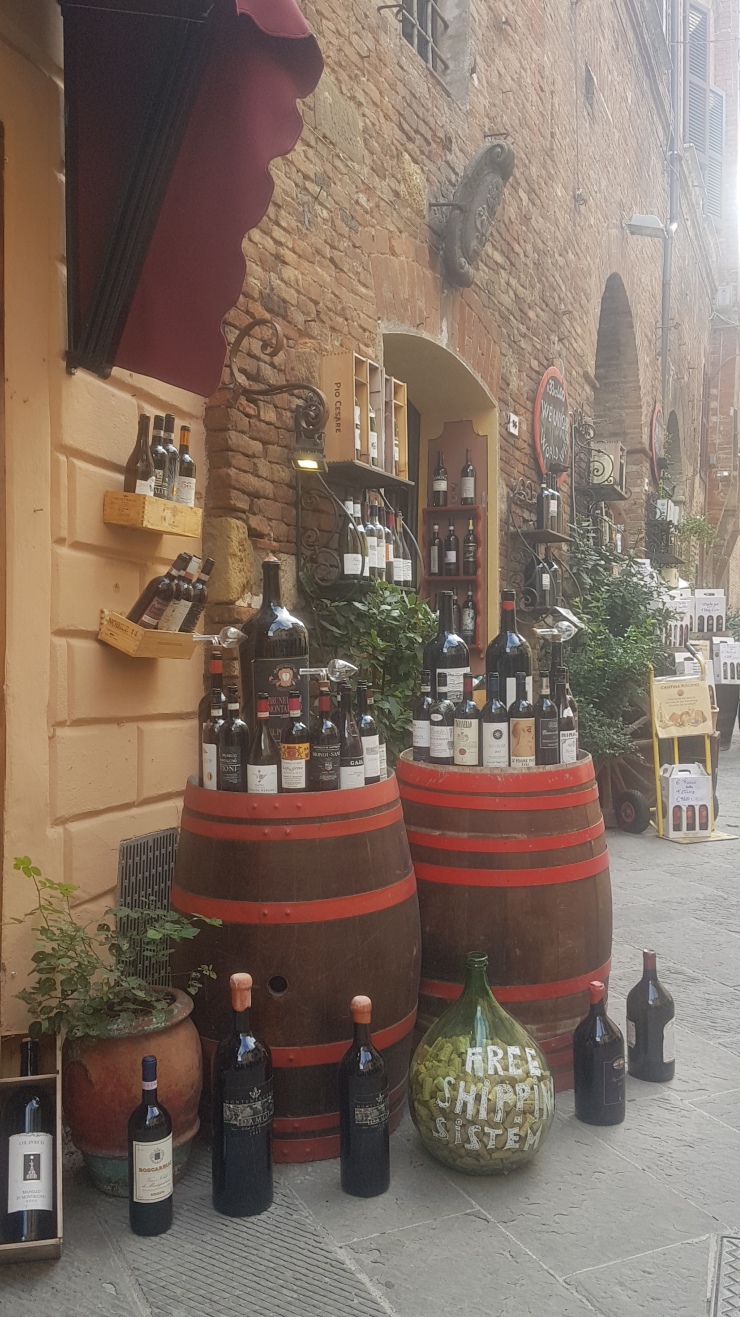 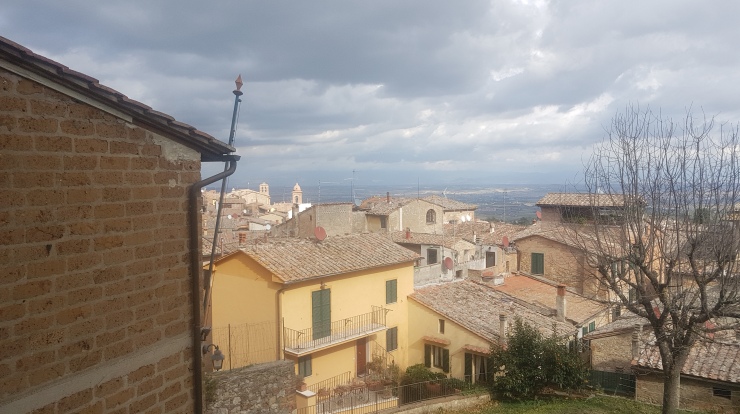 Pienza is where the film Romeo and Juliet was filmed and being it’s 50 th anniversary, the film was being played in the Piazza. It’s definately a romantic little town with outstanding views over the Tuscan countryside. 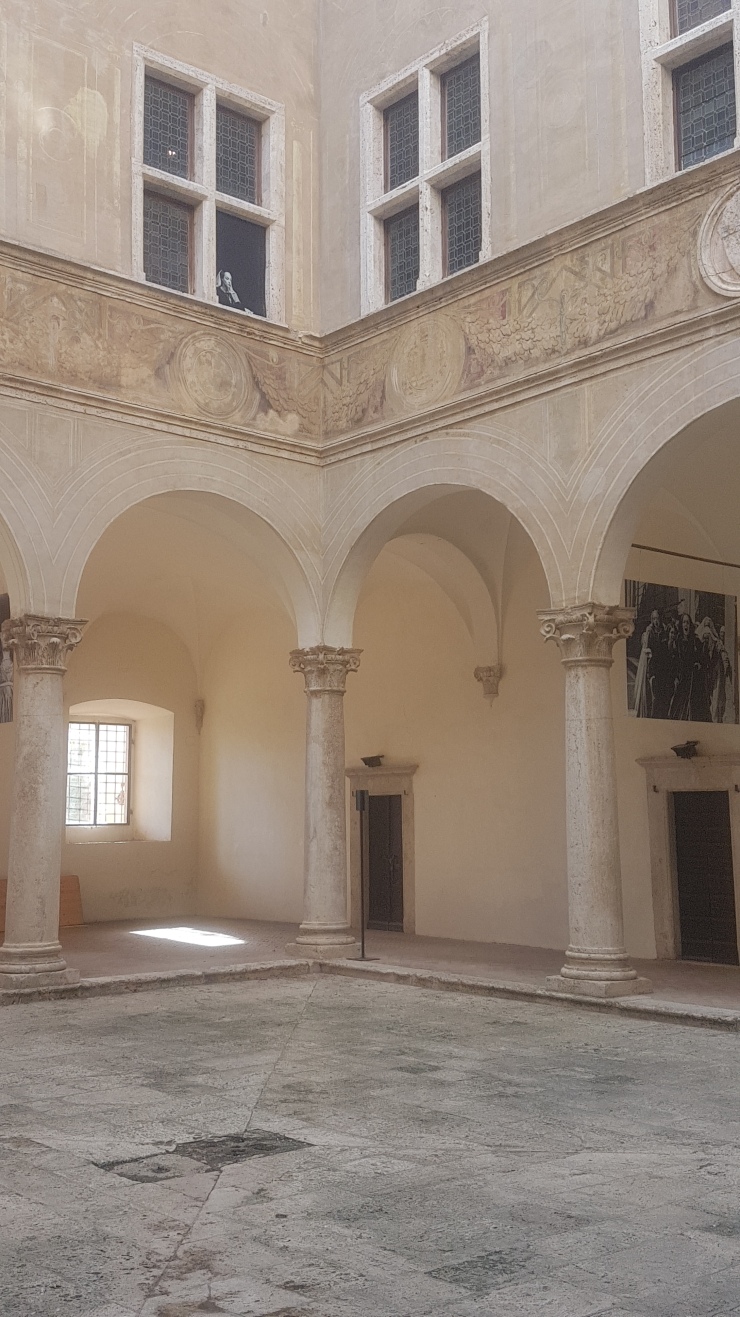 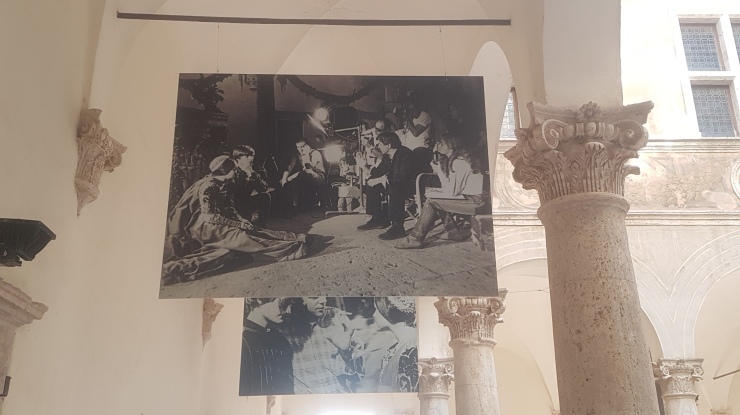 As it was late in the day we skipped Montalcino, as even though all these towns are picture book beautiful, they all stock the same stuff, so we headed for the thermal town of Bagno Vignoni.

What a delight with the small town centred around this natural thermal pool, no swimming allowed. 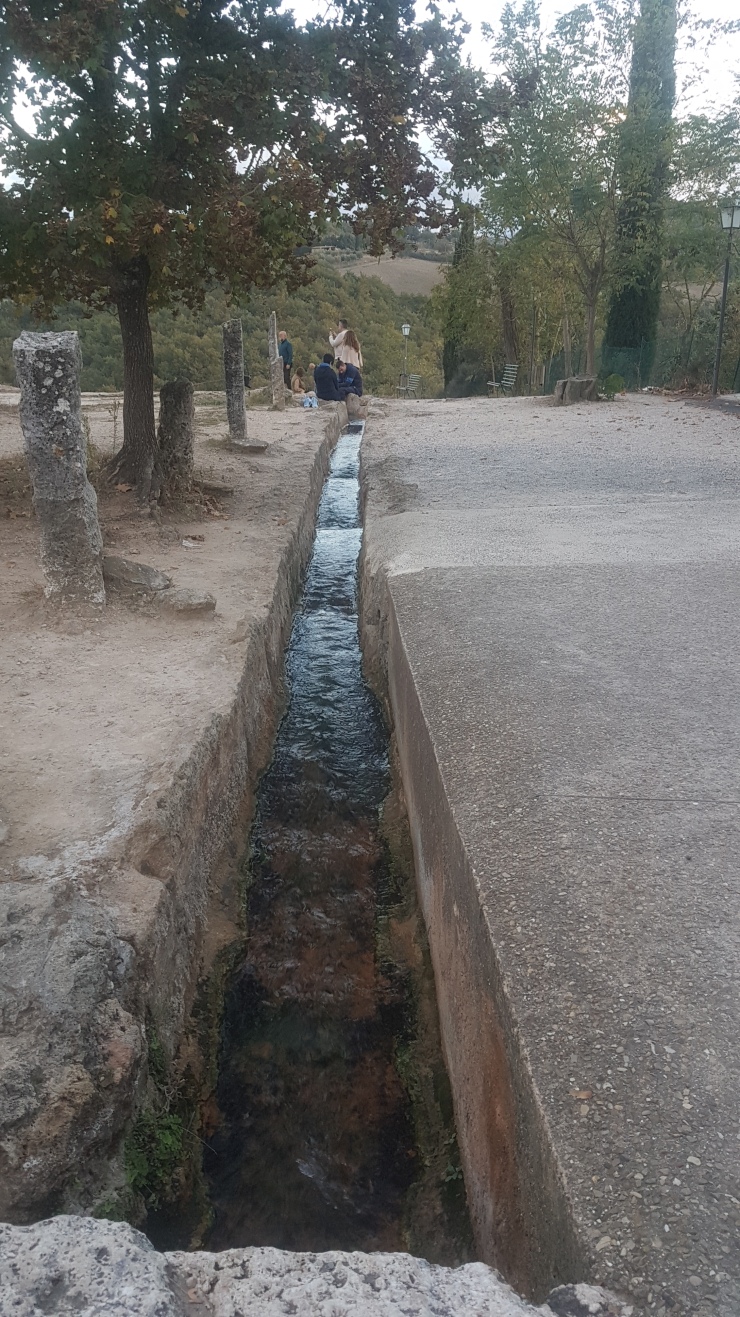 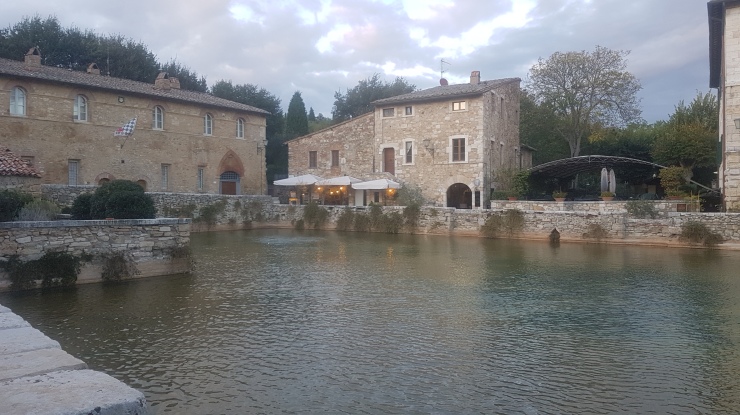 Here we are at the bottom of the waterfall where there is a wonderful natural pool a few metres up the hillside from us. It’s a bit on the chilly side this far down the hill but it’s stunning just the same. 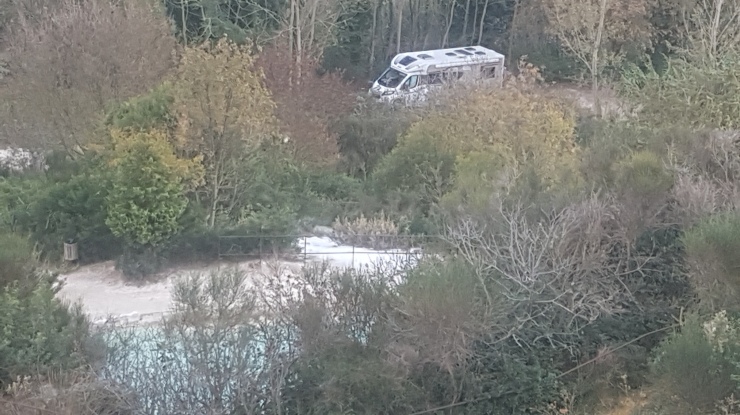 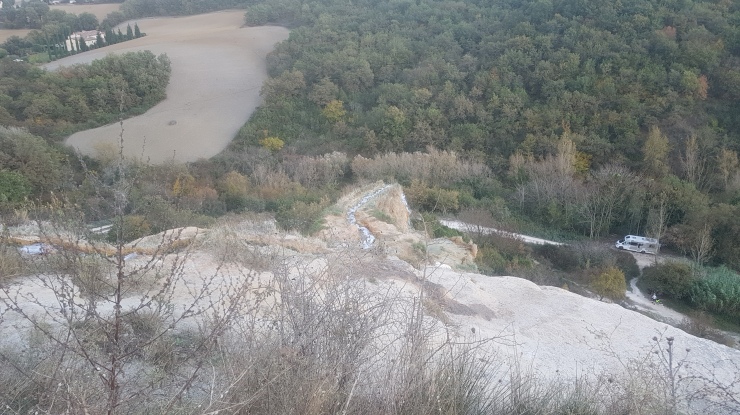 Tomorrow we will figure out how to get to Rome without actually driving anywhere close to the madness.

2 thoughts on “Under the Tuscan Sun.”

Disconnecting ...
Happy New Year's.
Early morning fish and these beauties came through.
The wild horses of Pawarenga
Join 168 other subscribers