After leaving the gorgeous, rolling beautifully manicured countryside of Tuscany, the scenery changed to grassier landscapes but still barren. All the waterways are bone dry, a testament to the fact we have seen little rain in our 4 months of traveling. (That all changed in Rome).

The countryside is full of dormant commercial areas, tagged, looted, overgrown, just left to rot away into the earth. It’s such a blot on the landscape sadly.

The road to Rome is not “paved in gold” but rather rutted with potholes and broken tarmac, the worst roads in all of our travelling bar that one road in Poland when we crossed at some obscure border. This is Italy for goodness sakes – home to The Maserati and The Lamborghini….

As we got closer to the city, that’s when I was truly disgusted. The rubbish piled high along the highways was terrible and such a let down to my dreams of Rome. I very nearly turned around.

Rome, this country that I had held on a pedestal, was a junky, junkyard.

We arrived to our Campground, which is lovely, paid the golden ransom of 30€ per night and got over myself. It’s amazing how a camp shower with hot, unlimited water instead of the 2 minute dash we are used to, can raise the spirits. We even downloaded a video and watched that for the evening. A real treat.

The next morning, early, we caught this beauty to Rome.

In any other city this would be in the junkyard of retired trains but not in Rome.

Walking into the Piazza from the train is a little startling, a little awe inspiring. Firstly you have these large, impressive sculptures, water fountains and buildings, then you have the armoured vehicles with ten guys casually standing around with machine guns. 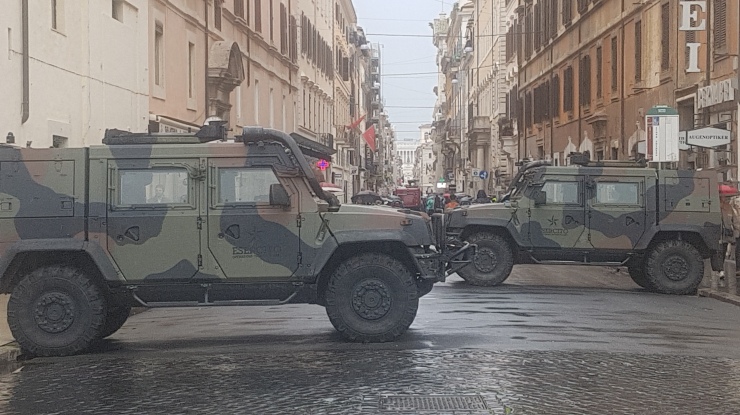 Even in the rain, yes it bucketed down the whole day, you can’t help but be impressed with Rome. It’s like no other city with streets lined with churches that are just so ornate in decorations, paintings and sculpture. Being Sunday, we attended service for a few moments which is truly special with all that pomp and ceremony.

The outside just doesn’t do the inside justice.

It’s easy to find good coffee in the city with fabulous coffee bars in every nook and cranny.

Because we have limited time and because we didn’t want to stand in the queues – yes they are as bad as people say – I opted to buy our tickets for The Colosseum online and pick them from the ticket office. When you book online you have to choose a time and the first time slot available was 1pm. It makes just wandering around the city quite difficult with something scheduled right in the middle of the day so I planned to tick off The Spanish Steps and The Trevi Fountain the morning, The Colosseum and The Palatine in the middle of the day and The Pantheon in the evening.

The Spanish Steps are just steps but the view over the rooftops of Rome with all the rooftops terraces is lovely. 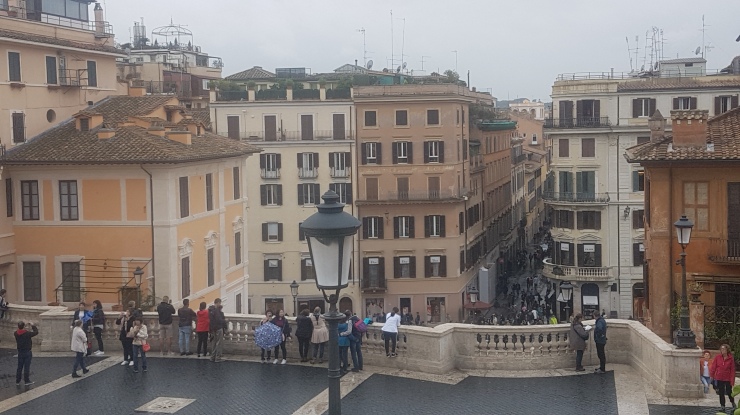 The Trevi Fountain however is everything Rome is about, large, statuesque, impressive and intricately ornate. At the end of a day it’s a water fountain in a small square in Rome, but what a fountain!!!

This is us soaked to the skin.

I think this is where we first got an indication of the crowds, the sheer mass of people crowded into this small half oval shape of a square all jostling for that special Instagram shot. However it wasn’t until we rounded the corner to The Palatine area, which by the way, takes your breath away, that you discover just how many people are visiting Rome.

The Paletine area, is where Rome was first built. According to the myths and legends Rome was discovered by two Latin brothers Romulus and Remus who lived in a cave on Paletine Hill and we’re protected by the She wolf La Lupa.

What’s left is a ruinous city of once great stature, palaces, churches and gardens. So here is this ruined city dating back to Before Christ just sitting in the middle of Rome. It’s incredible. 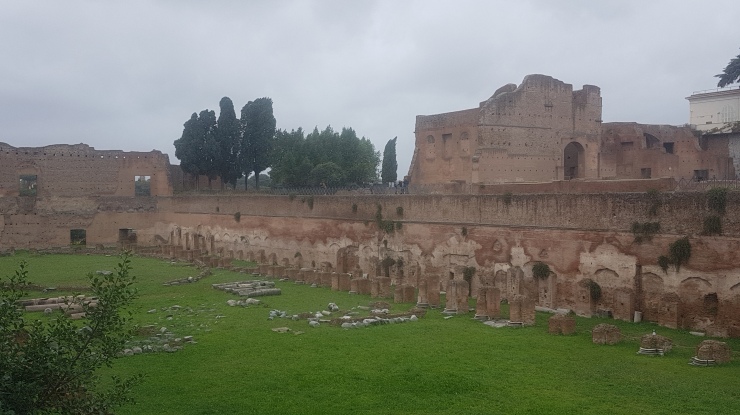 The ticket to The Colosseum covers entry into both areas and we also opted for an audio guide for The Colosseum as eavesdropping at other guides conversations is not always informative enough.

So dating back to 70 AD The Colosseum was built basically for The Emperor of the times entertainment. Originally it was filled with water and hosted shows of Naval Ships but then the underground interior was turned into cells for the animals and training grounds for the Gladiators. Apparently these “Shows” were even choreographed with different settings for the fighting being hoisted into the arena by a pully system.

All manner of animals, lions, tigers, hippos, bulls were let loose on each other and even other humans for the crowds entertainment. This usually happened in the morning’s events before the executions at midday. After the executions the main event of the day, the Gladiator fights took place. These could have two outcomes; death or the near defeated Gladiator could call it a loss and beg for mercy whereupon if the crowd were satisfied with the fight, they could get the Emperor to spare his life, or otherwise they would give the thumbs down to kill him. One particularly bloodthirsty Emperor ordered something like 12,000 Gadiator fights and 11,000 animal fights in a 120 days. 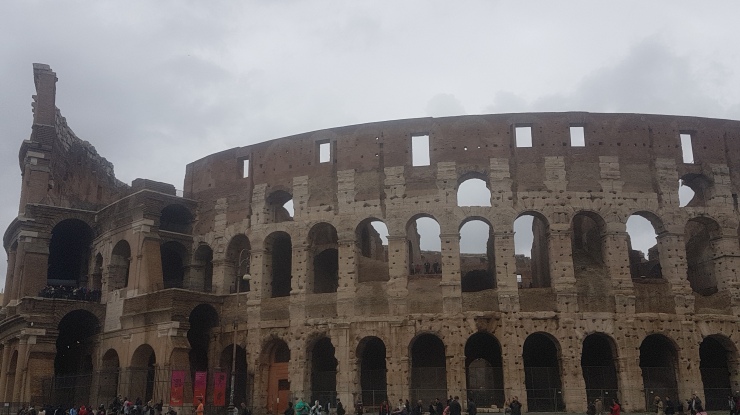 The Colosseum is certainly an impressive structure, but it’s definitely a reminder of a gruesome past.

From one massive structure to the other we wandered in awe of such a display of architecture and sculpture before in need of some kind of sustenance.

When in Rome of course you eat Pizza and drink Italian wine.

Revived and starting to dry out because Rome has certainly turned the rain on for us, we headed for an evening visit to The Panetheon where the hole in the roof is actually a hole so when it rains, it rains inside the church as well!! It’s definitely an impressive religious structure and buried in a tomb inside was the artist Raphelite. 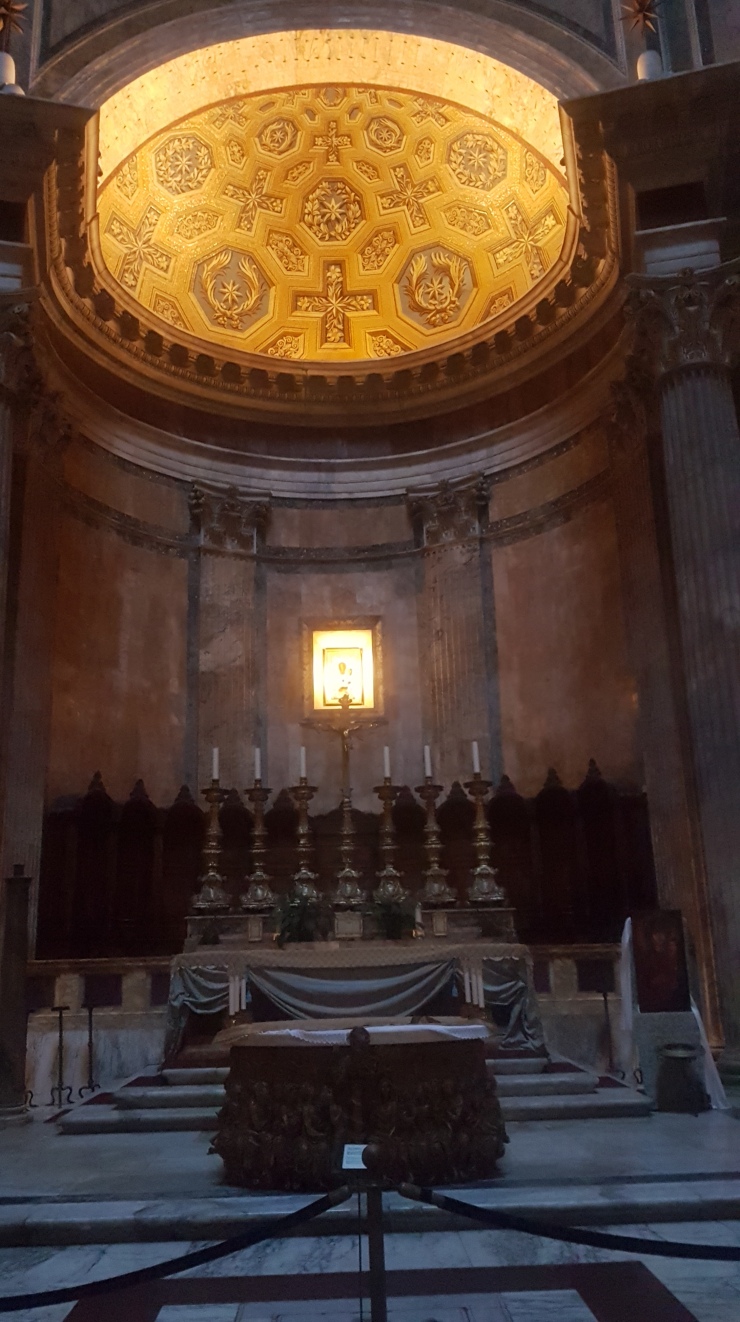 By this stage it was dark and we were shattered so back to our train we went for a smelly, dirty ride home where nearly every passenger was holding their nose because of the smell. We were dutifully met by our gypsy taxi driver from the campsite in his smelly van, before heading back to camp for a long, hot soak in the shower.

We were up early the next morning because check out of the camp was at 12pm and The Vatican Museums are vast and I just couldn’t miss Sistine Chapel. What we didn’t plan on was the storm that was forecast for later in the day which had kept children and university students home from school so even at 8.30 am the queues were already over 2 hours long at each attraction.

That’s when we were bombarded with sellers all offering “Skip the Lines” tours and that’s when we parted with a whole lot of money.

Luckily we weren’t scammed and our guide was a lively dot of a lady who spoke perfect English and had a great sense of humour, even if she did rule the young girls in our group with an iron fist barking at them every time they dare pass her flag. 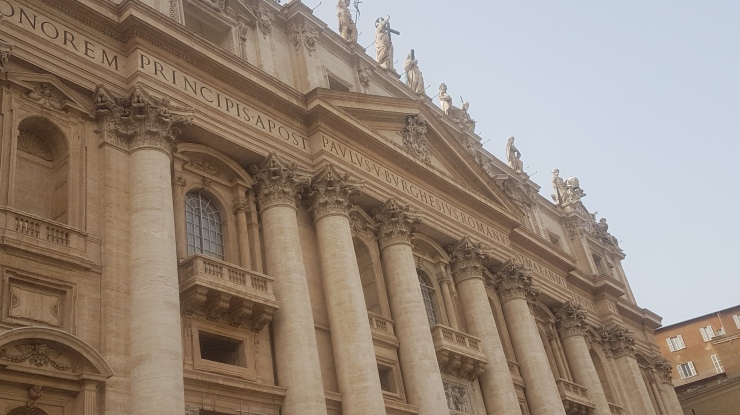 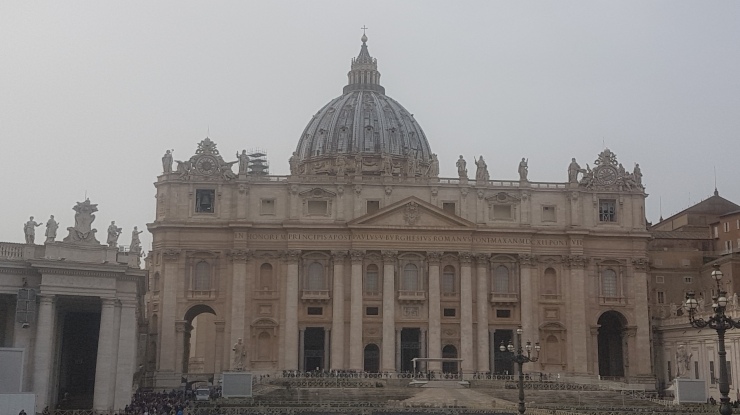 The security here and procedures are immense so it takes an age to get anywhere and then you have to contend with masses of people. It’s pretty intense. The Vatican Museum’s are filled with treasure, sculptures, paintings, beautiful glass mosaics on the floor, tapestries and a room full of maps of Italy all painted and detailed all before any proper mapping systems were invented. 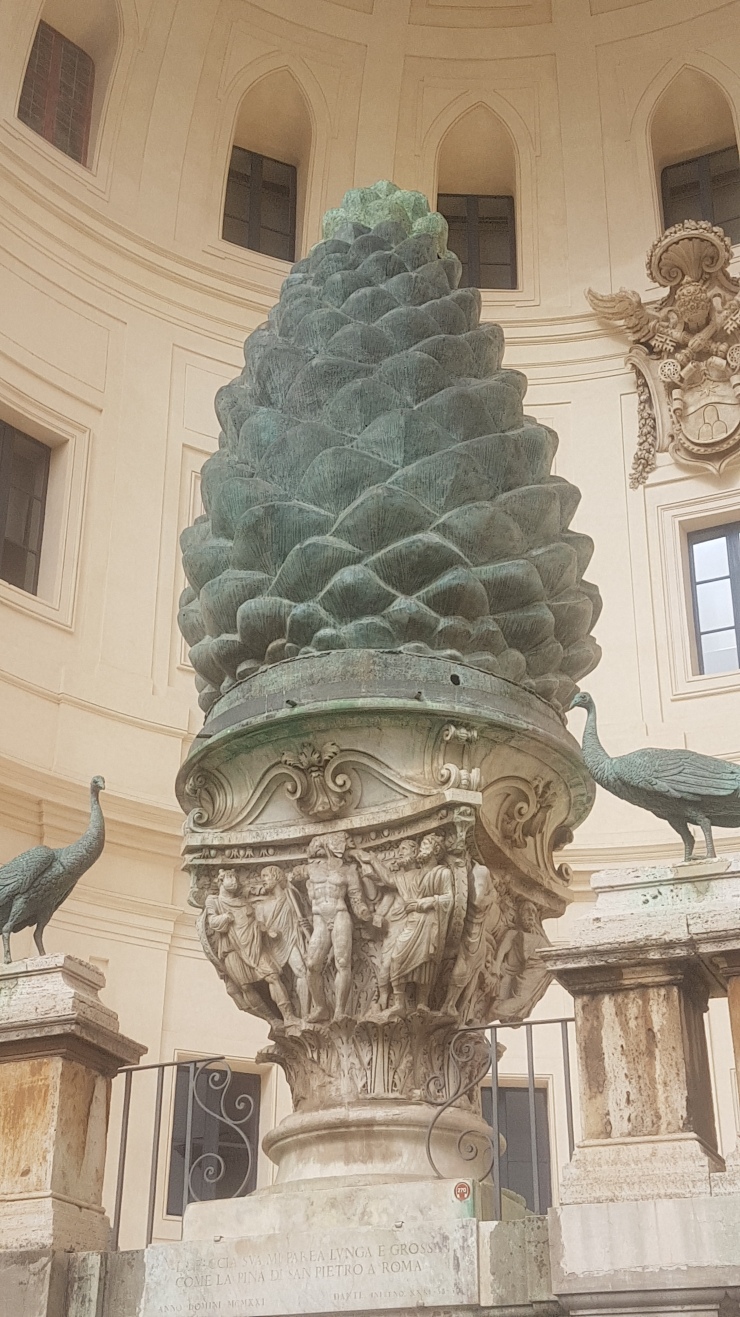 It is hard to see it all due to the number of people, photos are practically impossible but it’s still an absolute highlight of our trip.

After 2 years of painting the first few paintings, he took the scaffolding down only to discover that the paintings were too small and you can clearly see that in the Chapel. So from then on in he painted larger.

In the Judgement Day painting, he portrayed his enemy with donkey ears and a snake for a penis and placed him in hell.

The Chapel itself is tiny and packed with people and guards all demanding silence and no photos so sorry guys no photos here.

What I did take was heaps of photos in St Peter’s Basilica which took 150 years to build and it’s easy to understand why when you see the detail inside. However for me the most fascinating thing of all was that a whole city called Nero Circus exists 9 metres under the base of the Basilica, and it’s where they found the remains of St Peter himself wrapped in a red and gold cloth. They built the Basilica on top. Incredible. 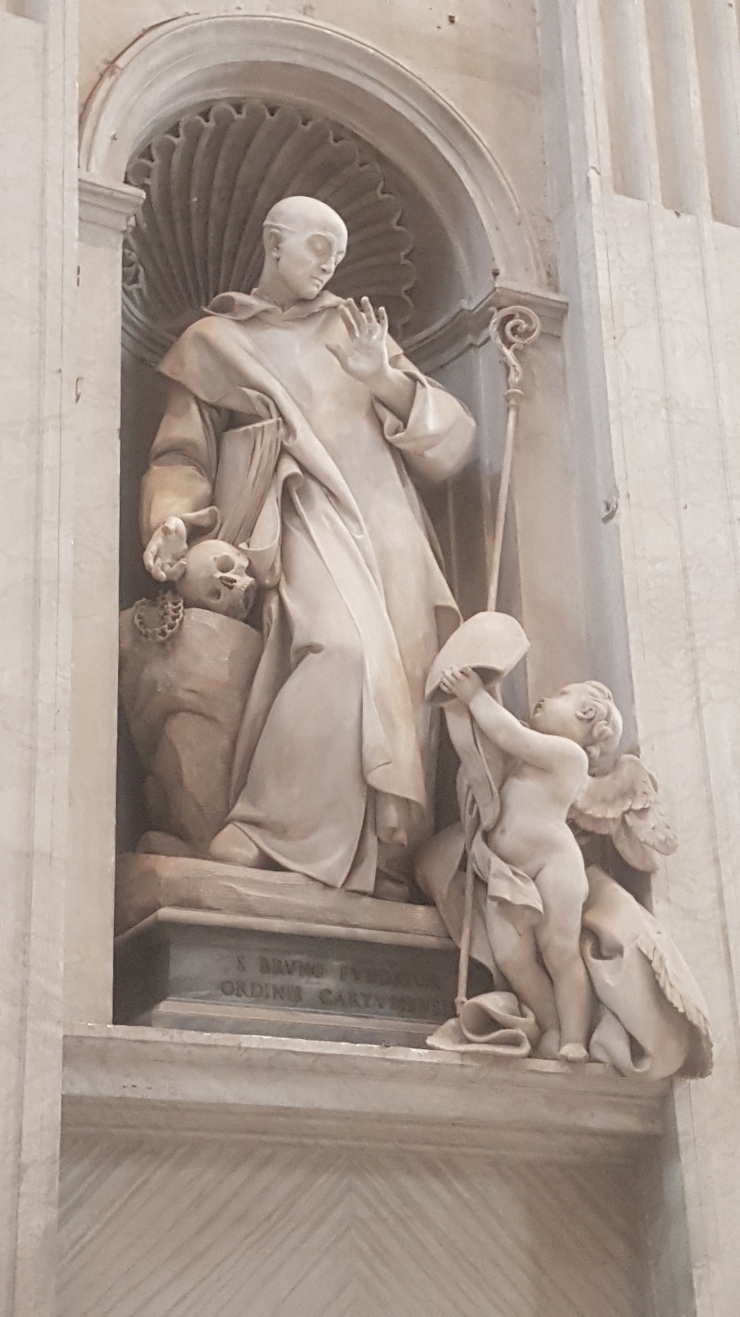 It’s been an incredible few days, yet outside the city gates, Rome is littered with rubbish, and it’s run down and unkempt. This morning we had coffee in this fabulous Italian kind of supermarket but old with all the suited men wearing Armani and women with Gucci shoes on and the latest hairdo so image matters and yet outside, rubbish washing down the main street in the rain filling the gutters. In the parks the grass is unmown and the pavements are broken and weeds are growing like forests in the cracks. It made me feel dirty. I just don’t understand the lack of pride in the city – a city which houses some of the greatest history in the world. A city that houses the Vatican. 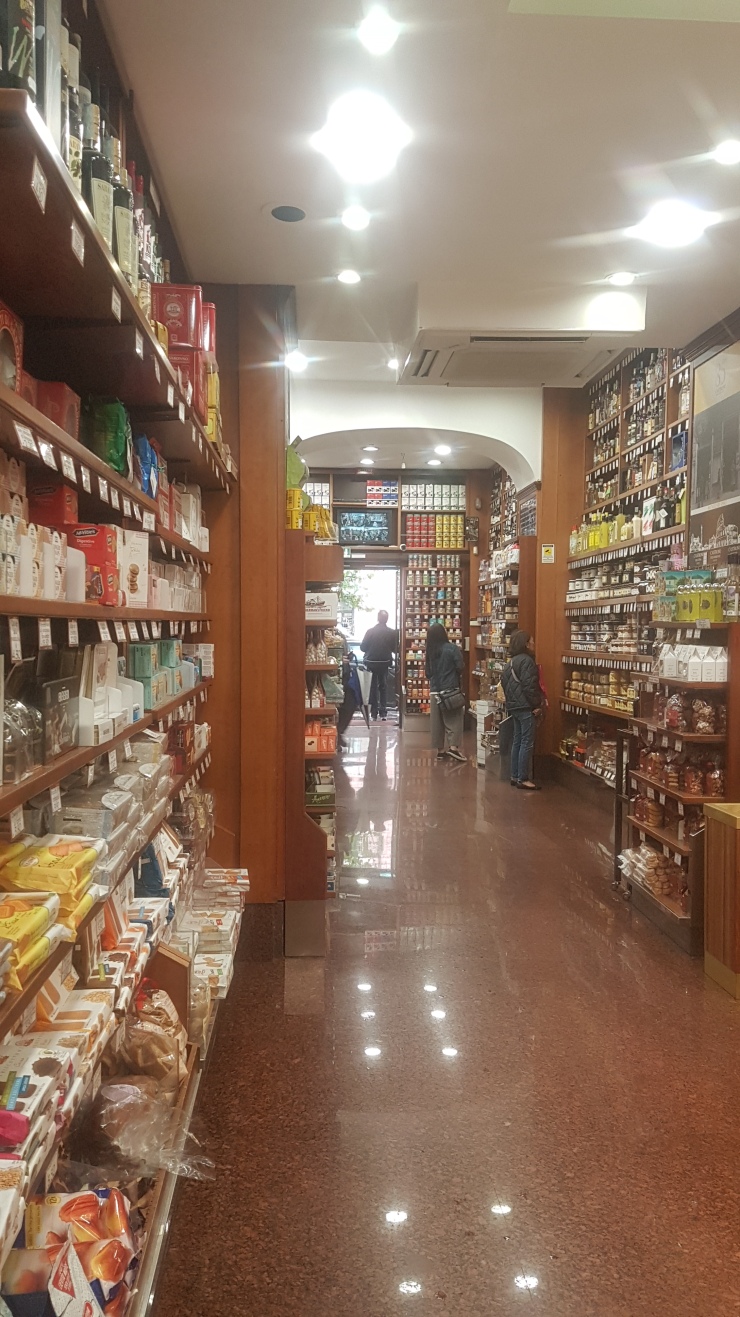 We are now holed up in the campground for free as a wild storm is ripping through Rome as I write. It’s nice to feel warm and cosy and clean inside my house on wheels.

2 thoughts on “Roaming in Rome”

Where the sky meets the water and becomes one.
Heading up The Macaulay Valley. You just can't beat the backcountry.
The Rob Roy Glacier Track is a nice wee afternoon hike through the Mt Aspiring National Park. It's a steady climb to the Glacier Lookout but nothing too intense. I know the 3 year old just behind us found it fairly easy flying up the steps hot on our heels 😂 Amazing.
How easy is it for us all to get stuck in a rut of repetition and routine. We all do it whether it's from Covid fatigue or simply being too comfortable in your comfort zone so it felt great to spend a weekend in The Mt Aspiring National Park giving the hiking boots a wee workout. We disturbed this cheeky fella and his gang attacking a couple of bikes supposedly hidden from these guys in the bush behind the Mt Aspiring Hut.
Join 168 other followers