Where to begin. We have vamped up our speed over the last few days and knocked off a bit of sight seeing so we are back in tourist mode, (although right now I’m lolling on a beach in Split while Doug gives the neighbours a tour of the motorhome). Did I mention it’s been around 30° today? 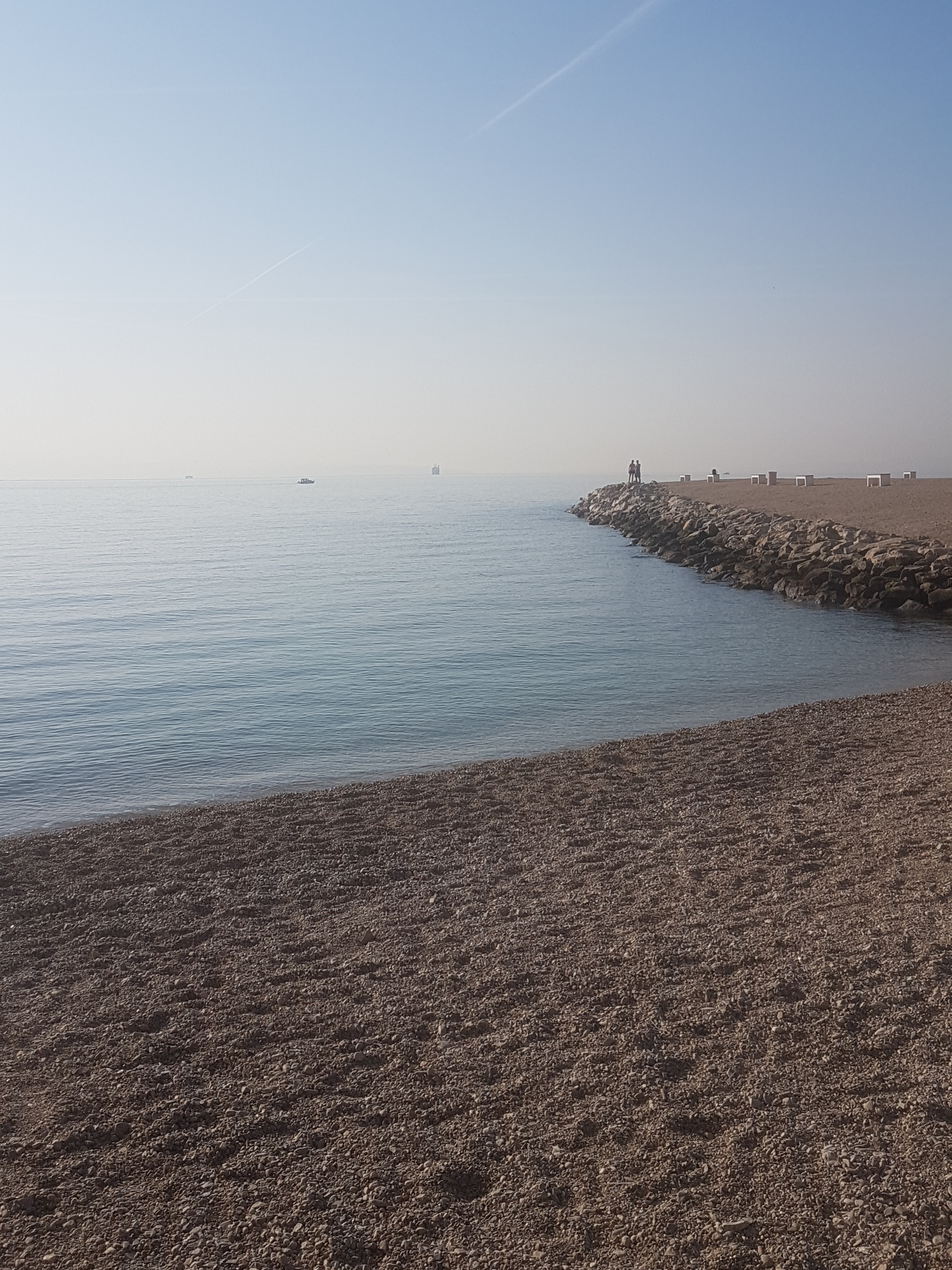 I think I left you in Zadar which was another fabulous town for us full of history. We parked up at the Marina, well actually more on the street next to the Marina with our deckchairs on the footpath, but what’s a few metres. We rode our bikes into town that night but no one has electric bikes in this neck of the woods and Doug’s always worried they are going to get flogged so we walk everywhere with them which is a bit of a pain. Still beats the feet anyday.

As it is we walk sooooo much and actually the next day we walked back into Zadar and I found this wonderful market full of fruit and vegetables so we bought quite alot of stuff. Not wanting to carry it around all day Doug decided to take it back to the motorhome. I sat in the Market Square drinking coffee and listening to the buskers in the sun and waited for him to come back. Well I waited and I waited and then I waited some more before finally deciding he’d found some rich old lady on a yacht in the Marina and ditched me, ( that or he had been mugged). So I did a runner from the cafe only to discover him walking back towards me still alive. Turns out we had parked further than I remembered. Yep electric bikes are great. 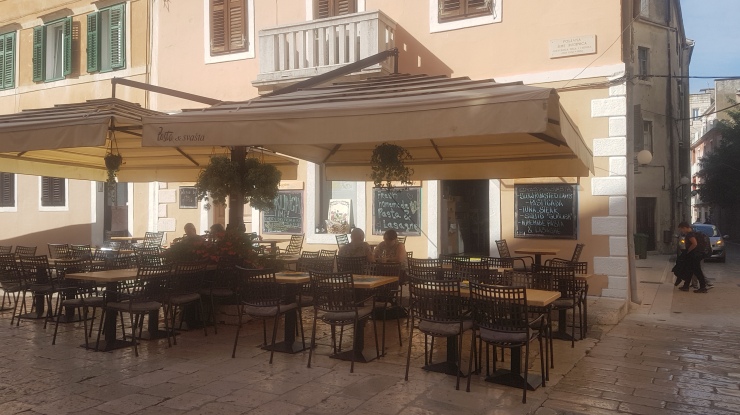 Anyway Zadar is full of lovely old buildings and gorgeous waterfront houses, (and then some dodgier apartments further in), but the sad thing is, so many of these stately homes are direlect, abandoned years ago when war broke out in around 1991.

The war and wars throughout history are responsible for huge scars on the landscape, and rockets fired in The Homeland Wars have destroyed large historical monuments in the centre of Zadar. Only a fraction of what was still remains.

We ended up staying 2 nights in Zadar before heading to Trogir with a detour to take in The Krka National Park. At $50.00 entrance fee to the park it’s a hefty charge just to see some waterfalls even if they are amazing. I have three things I don’t like paying for – Natural Attractions such as Waterfalls, Churches and overpriced Campgrounds. 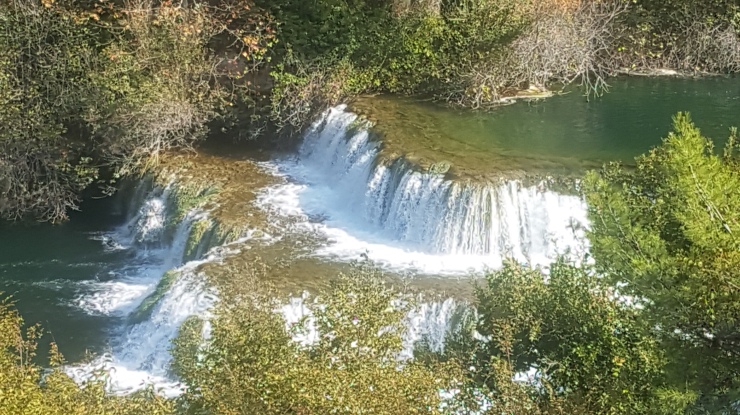 It’s a two hour wander around a boardwalk, looping around the lake and through the waterfalls which ARE lovely. Still $50.00!!!!!

We reached Trogir in the afternoon after taking a secondary route from Zadar which we both love doing because you get to see the real countryside, even if sometimes it means ending up on a few goat tracks and roads that get narrower and narrower until they finally taper out to nothing and you have to back up quite some distance in a large motorhome. Yep tempers can fray slightly here.

As Doug was down to his last T shirt I spent some time on a few domestic chores before heading into Trogir but it’s funny we both quite enjoy spending the evenings visiting the towns when all the tourist buses have left. These old towns have very narrow streets!!

Trogir is a UNESCO World Heritage Site and rightly so because it sings old world. While the seafront was filled with people, walk a few lanes in and the restaurants are empty proving that the season is well and truly at it’s end. Fabulous restaurants too with fresh seafood on display yet no one to eat it. We love it this way and can’t imagine what it’s like in full tourist throttle. 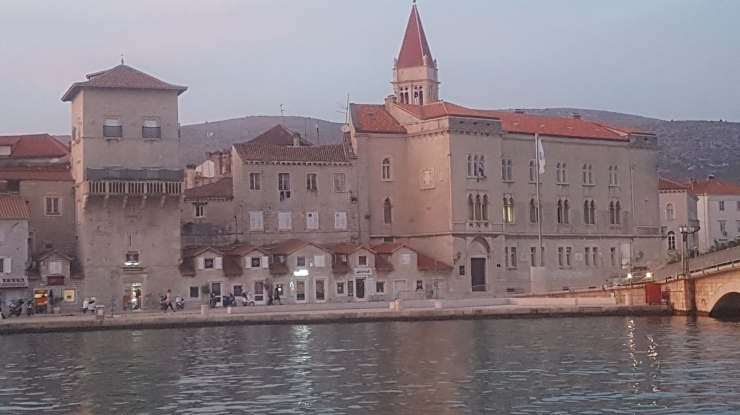 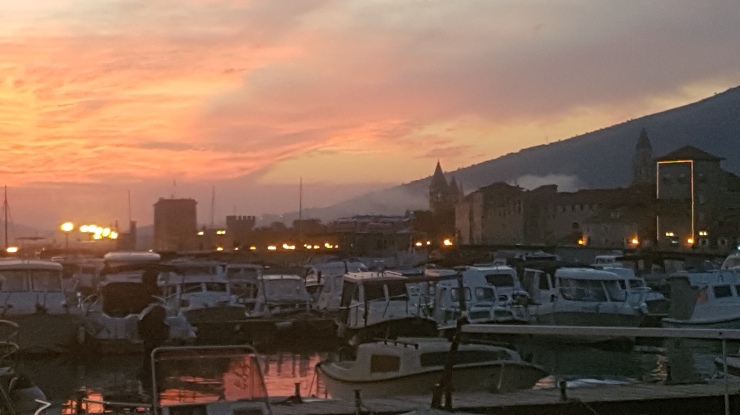 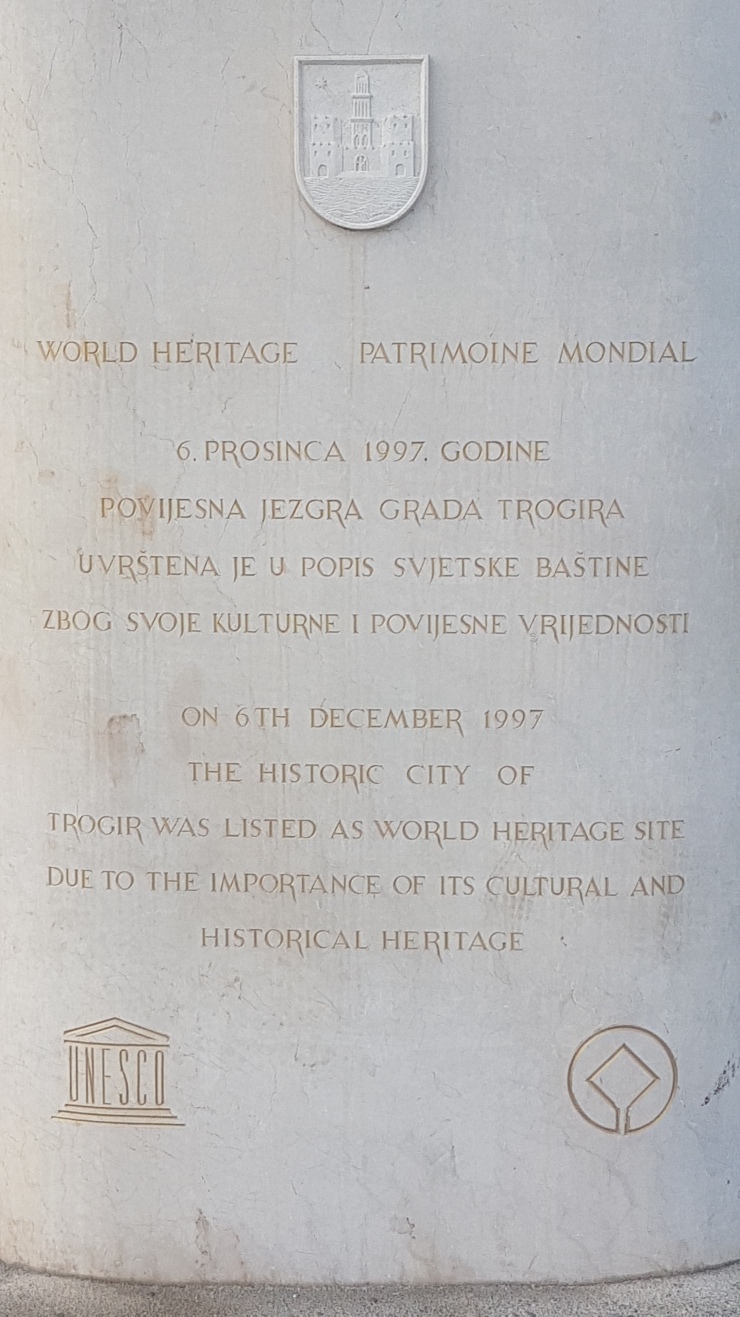 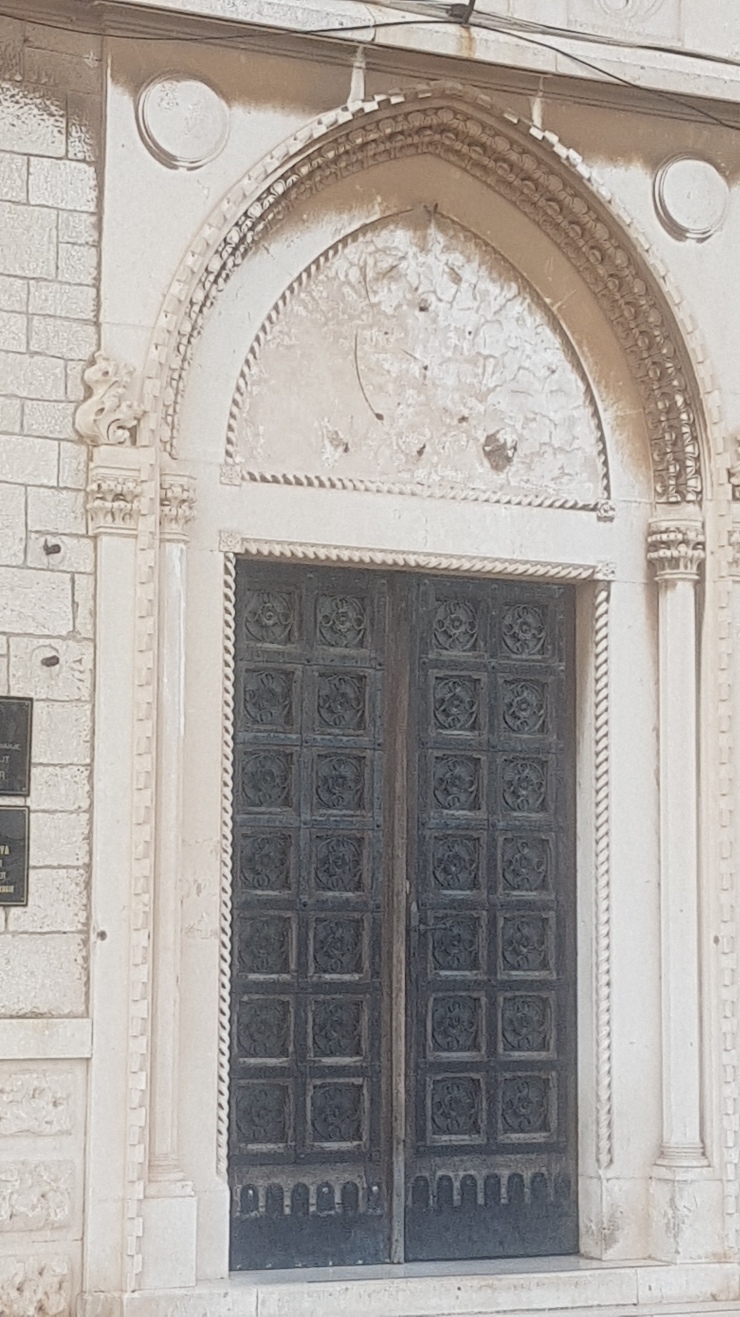 This is us playing cards from our seaside vantage point in Trogir, great spot but,  as we later discovered, quite noisy being on the flight path to Split. 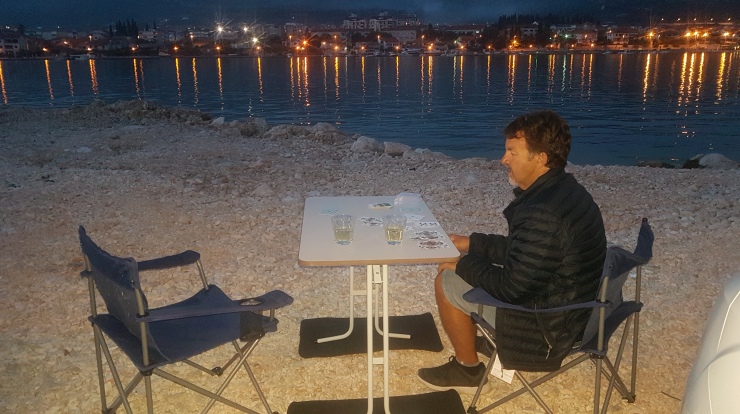 From Trogir we had headed round the bay to Split. We tossed up whether or not to drive as far as Split. With the ferry to Italy costing more than $400.00 we are going to be retracing our Croatian steps, but it seemed crazy not too and I’m glad we did.

We have found ourselves here on this beachfront paradise that was deserted when we arrived but after spending the day in Split, we came back to a beach packed with beach goers. Turns out it wasn’t a dog beach afterall.

Split is lovely and probably the jewel in the crown when it comes to heritage buildings. The Venetian rule  is hugely evident here in the Palaces and architecture, in the designs and structure. It’s wonderful to see heritage come to life with markets and shops and restaurants all filling the town. 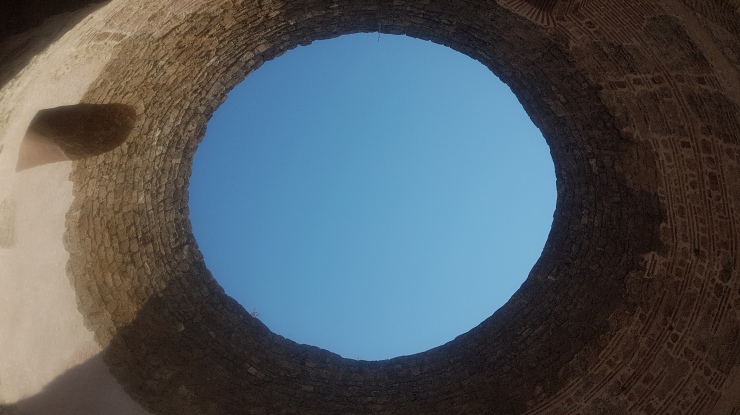 We had coffee and shared a pasta at what I believe now to be a highly rated eatery. We just thought it was quirky and hidden but I think we actually just chanced a seat at the right moment. The pasta dish was delicious made using all locally sourced products, something I love and afterwards we got chatting to the owner. Seems she was hanging out for the season to end and to become a customer in someone else’s restaurant.  It was called Kod Sfinge Vanevropske Zviri, quite a mouthful; she will open again in March and can highly recommend this place.

Which brings us to now. I’ve just had a swim and Doug is chatting to the neighbours.  Tomorrow we will find a beach where the water is clear and the rocks are white and we will spend a couple of days chilling, ( NOT SPENDING MONEY),  before heading to Venice. Imagine we are going to see Venice. Stuff of dreams.