After a morning spent cycling around the Swedish Port of Malmo we headed to Trelleborg to our ferry. Our bikes are amazing to ride so we are totally thrilled with the purchase. I think they will come into their own back on NZ where its hillier whereas the electric side of things here is just an extravagance.

Our ferry wasn’t until 4.30pm but we still managed to nearly miss the check in time thanks to spending too long grocery shopping beforehand. We needed everything after emptying the cupboards in Norway.

It was a 6 hour journey across the strait to Rostock in Germany and once again we timed the weather perfectly for a relatively smooth sailing.

By the time we left the ship, it was nearly midnight so we parked up with the trucks at the port and kipped until morning. Needless to say we were on the road fairly early the next day.

We had the usual kerfuffle of missing turn offs and finding suitably big enough motorhome parking in Berlin but we survived it. Funny thing was this time we actually did end up at the airport – an abandoned one. Tempelhof was, I gather, West Berlin’s Airport before The  Berlin Wall was destroyed. Now it’s a recreational area for the people of Berlin and last night we had a picnic dinner on the runway and camped just inside the old main entrance. Bizarre. 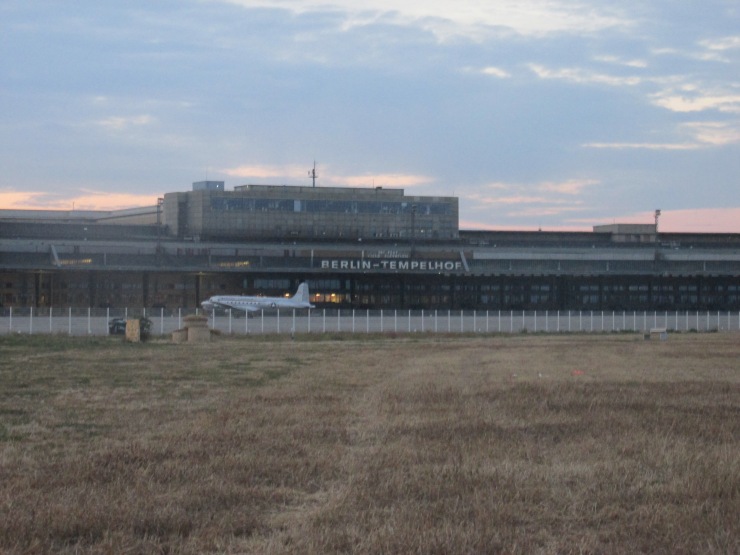 Berlin Central was a simple underground train ride away which was incredibly simple. We got off at Check Point Charlie, only because it was the few words I recognized.

Check Point Charlie still has it’s GI’s but only as a gimmick. Still the history behind it all is far from gimmicky. 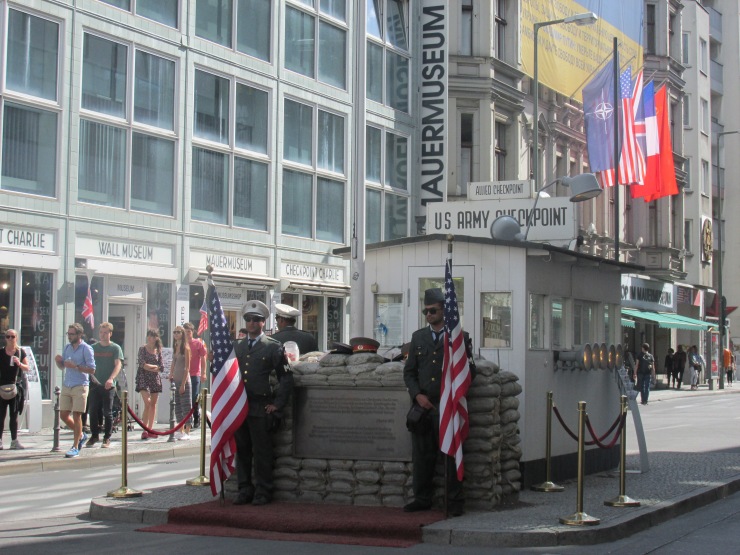 Check Point Charlie was operated during the West German/East German division by the US forces to let military personal and dignitaries cross through The Berlin Wall. Another tragedy in Germany’s ugly past.

Of course you have to visit the Wall and read the stories, you also need to visit The Topography of Terror to read the stories of Hitler’s rein of terror and persecution of Jews. Afterwards we visited the Holocaust Memorial Stones in the city to pay hommage to Germany’s sad past. Its quite amazing to note how integrated Berlin is now after such a long time with a wall separating the two. 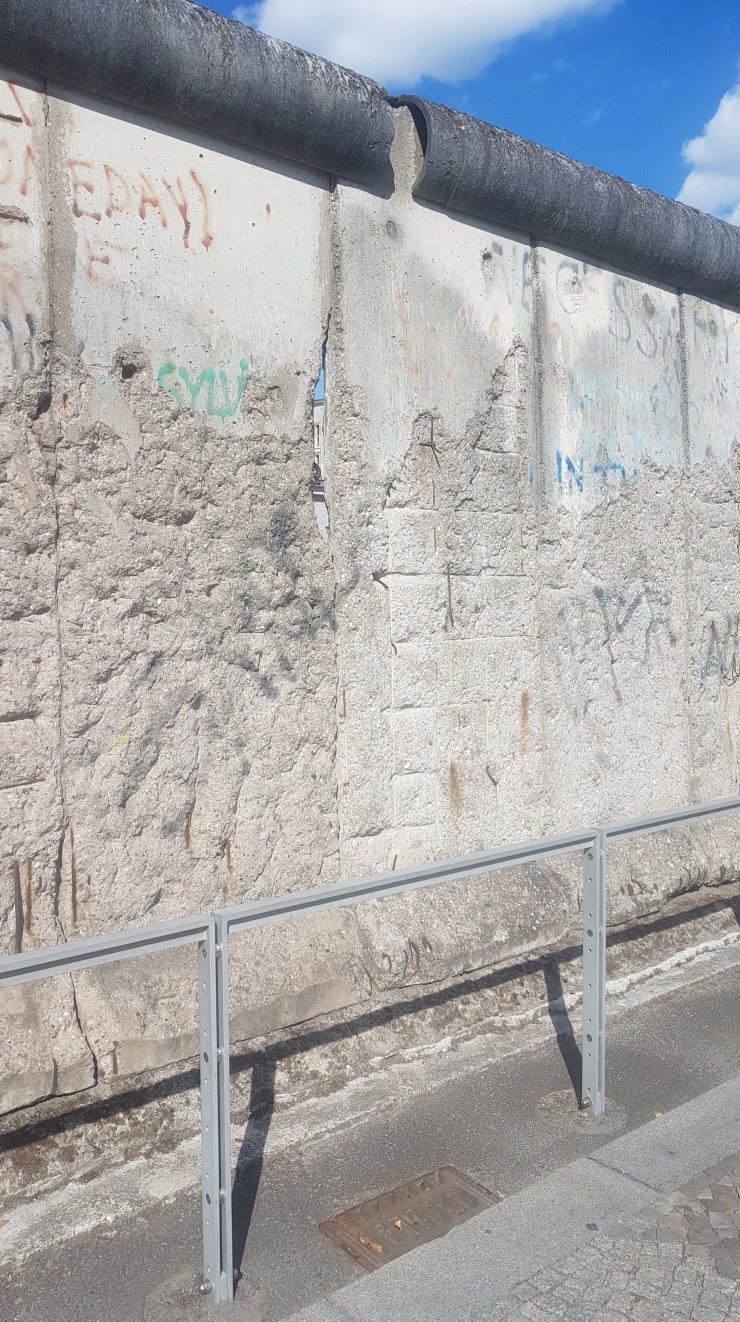 Doug used the word “ghetto” to describe Berlin. It does have that certain modern, ghetto feeling. I think it’s probably a city that you could either love or hate.

The part we really warmed to was the area surrounding Museum Island. You don’t need to go inside the Museum’s to appreciate their architecture although when we visited they were restoring many of them so they were covered in scaffolding.

The Museum area is where we found the markets, the street performers, the canals and the beer gardens. It’s also where we found the dancers who must come on a Saturday evening to waltz in the square overlooking the canal. It was pretty cool and a nice way to end our evening in Berlin before heading back to Tempelhof and a runway with our name on it. 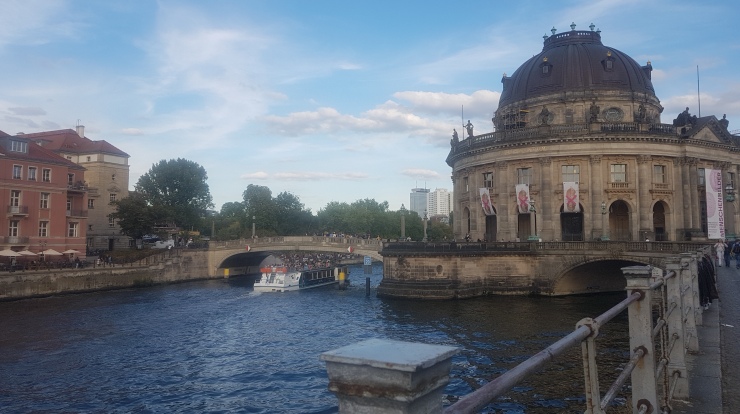 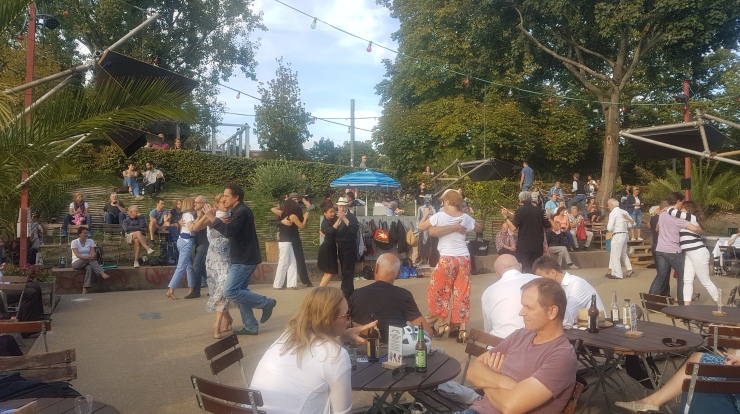 Did I love Berlin, I’m not sure, its a bit souless for me but then again is that because so much has been rebuilt since the war? Needless to say thanks to an abandoned airport we were able to park our motorhome practically over the train that ran into the city and all for 9€ for 24 hours. When your in a motorhome you cant get more convenient than that.

Tonight's sky here in my backyard.
Cape Reinga - the spiritual home of New Zealand and the meeting place of The Tasman and Pacific Ocean. Hard to believe that for 10 years we took busloads of tourists here everyday.
There are so many great walks here at Mt Cook which only take a couple of hours. How lucky for me that it's all in my backyard.
We just had a fabulous weekend staying at Glendhu Bay Motor Camp just chilling out before an early morning hike up Rocky Mountain.