It was a very shaky start to Poland. I probably stuffed up and didn’t research the best route from Berlin into Poland just the quickest. We have a new offline map app which seems to be more reliable than the others we have used so we are saving on data which aside from LPG has been our next biggest hassle.

Anyway we crossed the border and the beautifully sealed road of Germany ended and this bumby, rutted goat track appeared. We surmised that it may be a way of the border police slowing down the people they needed to catch but then it went on for 89 kms so I guess we were wrong. We both thought the motorhome would have developed a permanent rattle after that.

Our destination was Wroclaw which is basically the halfway point to Krakow. After our bumpy entrance to Poland we had decided to venture off The Highway and see the real countryside. It appears to be a horticultural country with paddocks of crops as far as the eye can see. Then there are the towns in between which I can only describe as “gritty”. I began to develop that feeling in my stomach when I hate something.

Every inch of me cried,” Don’t stop”. Here’s the thing, its usually Doug that judges before he sees a place, whereas I do the research and know there’s more to these places than the industrial areas you first come to. This time it was Doug saying, ” Come on it may be ok”.

So here’s a lesson in not judging a book by its cover because Wroclaw is the best city I have seen in Europe so far. Pretty bold statement I know but it’s a fact. 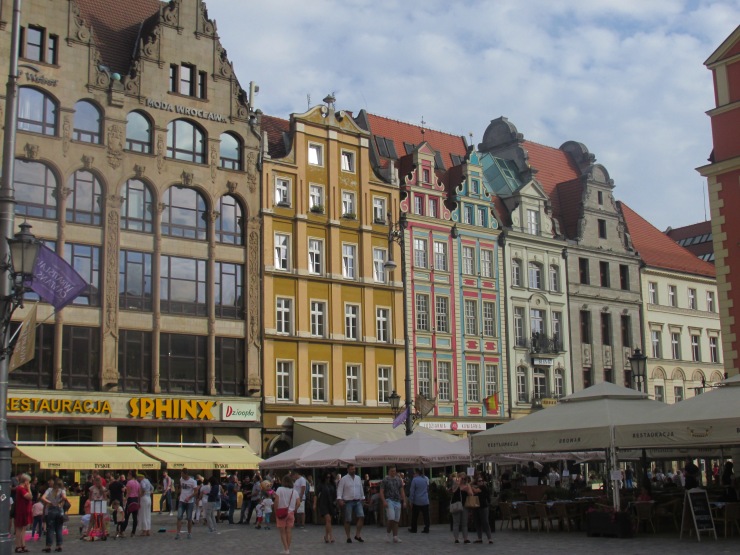 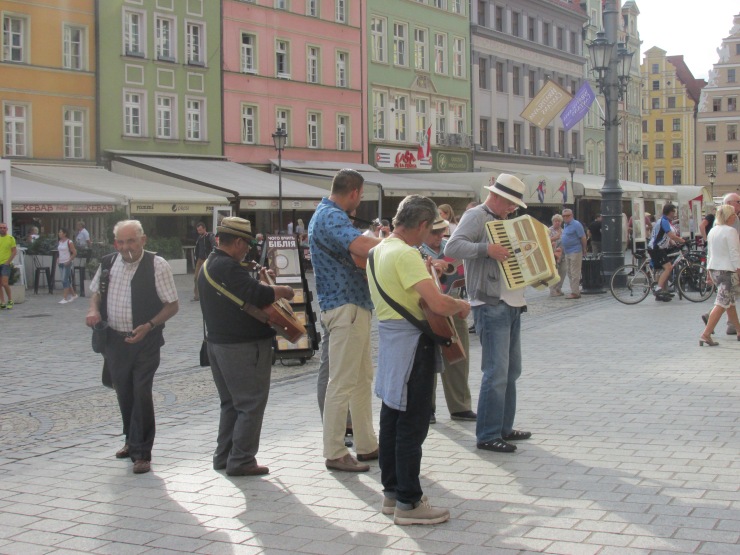 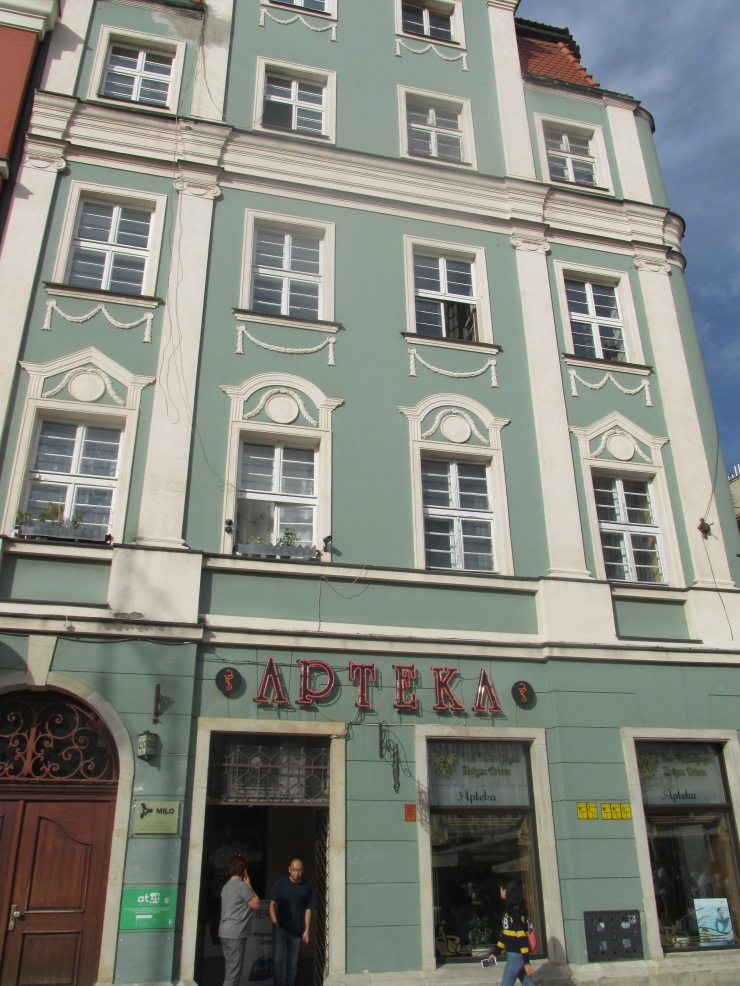 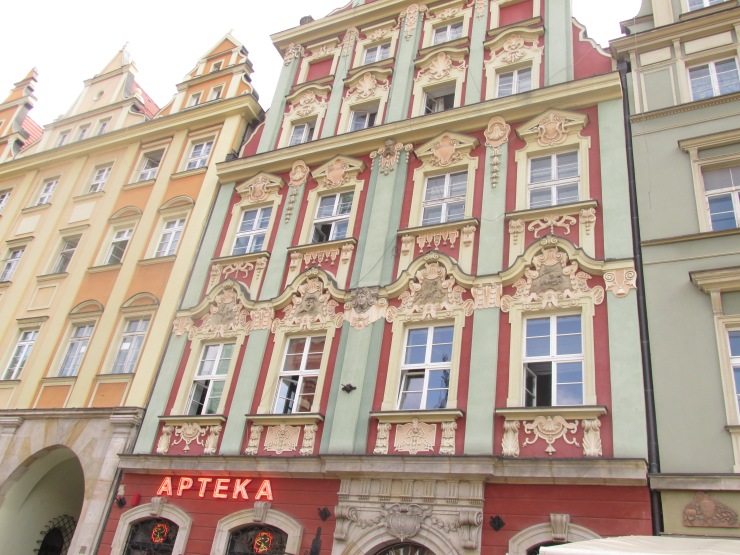 We parked in one of the cities green areas and rode our bikes into The Centrum along these wonderfully formed cycleways that took us right into the heart of Wroclaw to The Market Square. You actually have to see this place to believe it. Im still scraping my jaw off the ground. Destroyed in the war, The Market Square has been meticulously restored to replicate what was originally there and its been beautifully maintained with these gorgeous buildings edging the perfectly formed square.

Being a Sunday afternoon there were crowds of people everywhere, all beautifully dressed enjoying the many restaurants and bars or just simply wandering the streets. The kids were out blowing bubbles in the square and there were buskers and street performers entertaining the passersby everywhere. Its generally just a really nice atmosphere.

Wroclaw has a cracking cafe culture with seating platforms in the streets and more cafes and restaurants than we have seen anywhere in the rest of Europe. The vegan cafe culture is certainly alive and kicking here as well and we even saw a Kiwi Burger Joint. 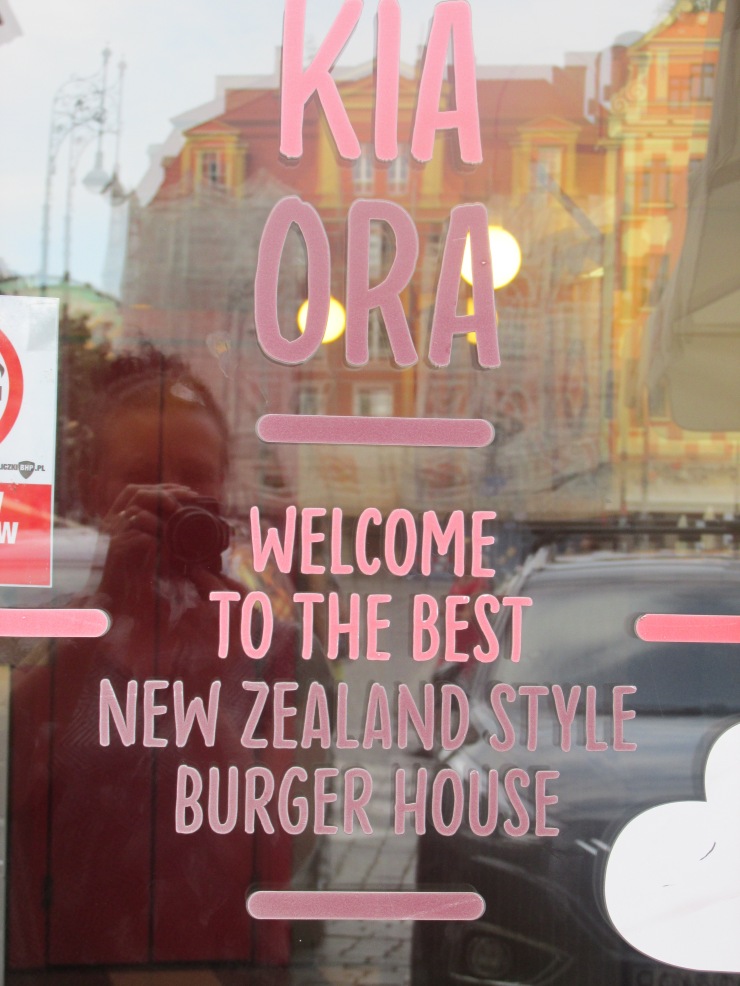 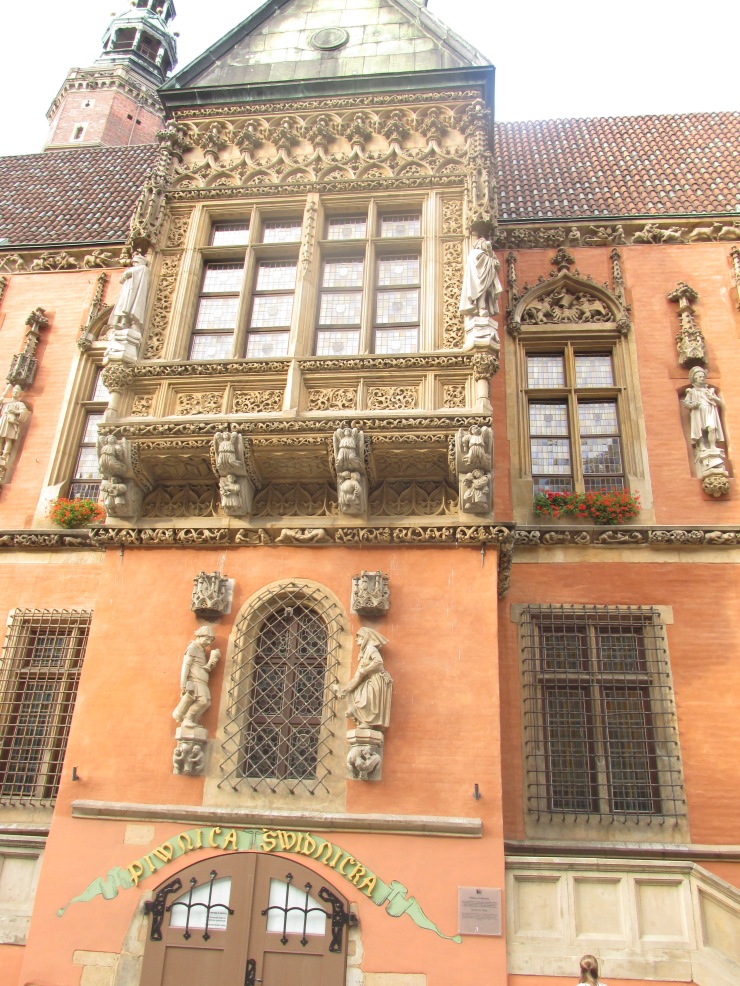 There was only one thing for it and that was to enjoy a nice glass of wine and a beer in a lovely wine bar, grab a front row seat and simply take it all in. Poland is also the cheapest country we have been to in our 2 months here so it made enjoying our drinks just a little bit more enjoyable.

I haven’t got sick of the churches yet, Doug maybe so, but it appears to me the deeper we head into Europe the grander they become. Well we stopped outside this lovely church, almost non descript on the outside, whereas some have these amazing steeples and pillars and carvings on the outside, this was almost plain. I can assure you there was nothing plain about the inside of “The Jesuit Church of The Most Holy Name of Jesus” which is a baroque styled church that was also rebuilt after the war to its original state with the wonderfully ornate interiors and the hand painted murals on the walls and ceilings. It really did feel like a house of god with all the nuns and priests wandering around in their robes. Loved it.

As we had left our motorhome in an unguarded park, we had to drag ourselves away from city before dark and cycled back, this time through the Park itself. Well talk about a day of surprises, there smack bang in the middle of the park was a  coloured water fountain display to Opera!!!! 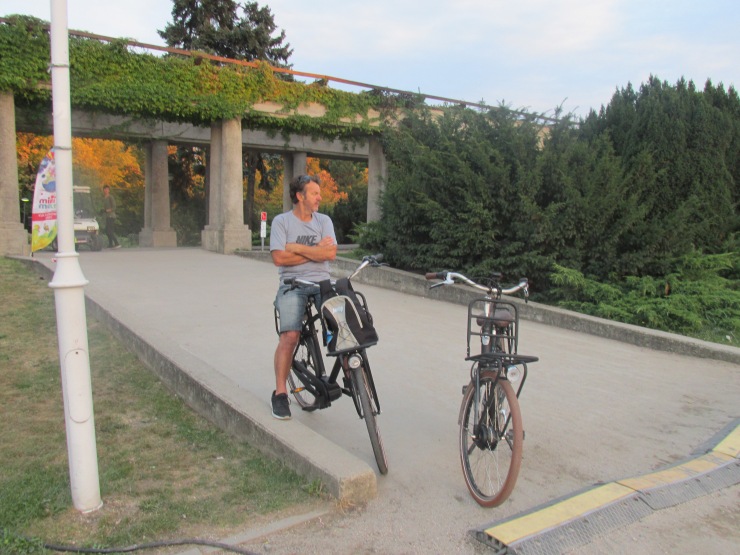 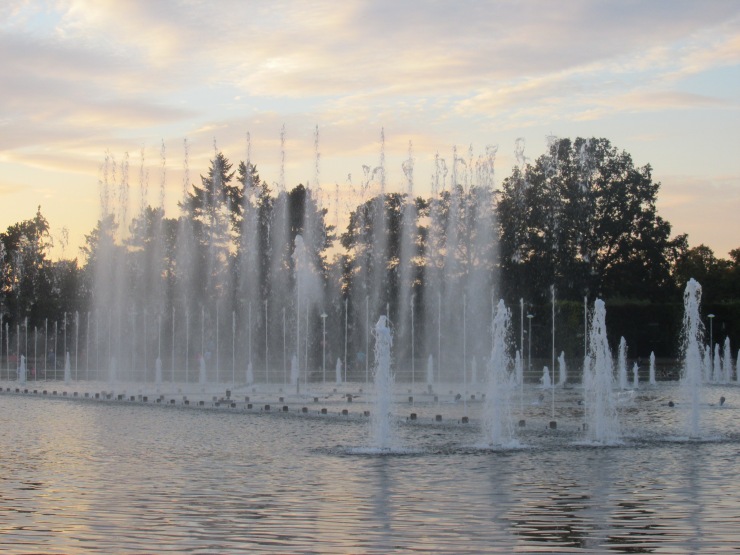 There were food trucks everywhere and all the Polish families were out enjoying the display and having a picnic in the park.

Talk about a wonderful wonderful evening, infact it was so great we rode our bikes back in the next morning to relive it all over again.

I forgot to mention the gnomes that are all over the city, little ornamental gnomes up lamp posts, on street corners… just another lovely surprise in the city of Wroclaw. 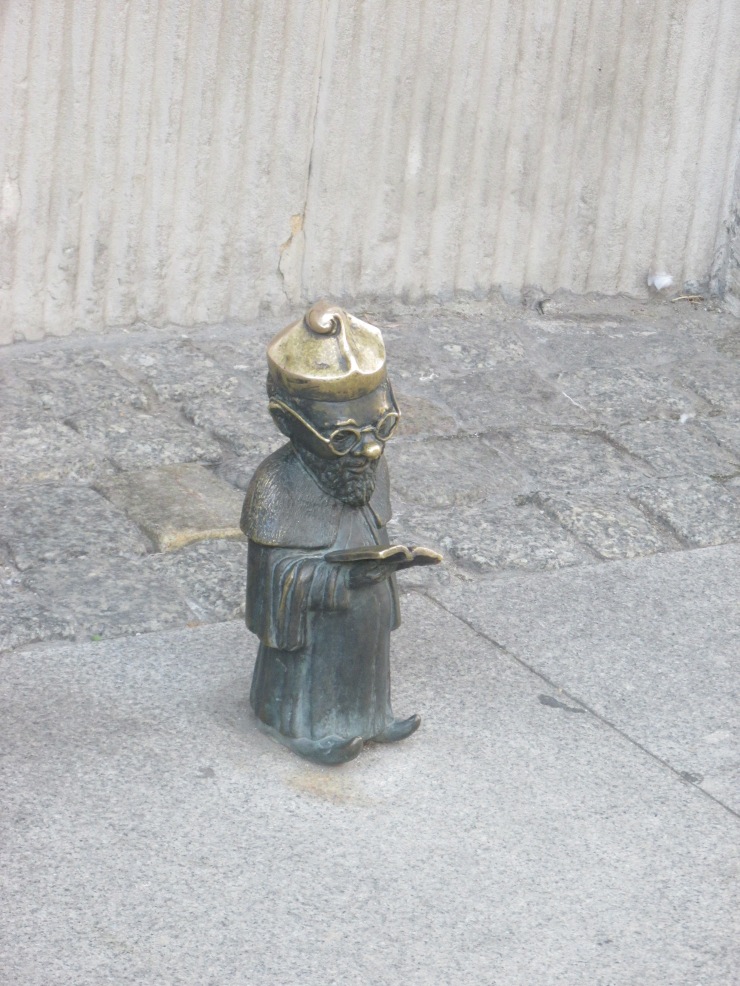 Right now we are on our way to Auschwitz to witness first hand the famous Nazi Concentration Camp.
I may need my tissue box.

This is what my backyard looks like - what does yours look like? Very lucky to have experienced this from the comfort of a private plane complete with 🍾 . Magical night. Thanks Ross and Helen.
White with a splash of colour
What a day for it. Let's be honest I'm not the most natural hiker. I'm absolutely fine on long flat trails but hills up or down are not my favorite. However I'm always up for a challenge so today we ticked off the Fern Burn Hut which is part of The Tearoa Trail. Seeing that hut in the distance was truly a welcome relief I can tell you. The track is totally achievable as a day walk in and out - it took us 5 hours return which is actually pretty good going but I couldn't help wishing we had had the time to stay overnight as the hut was just gorgeous.
Pondering mood