For me coming to Morocco and NOT going to the Sahara Desert wasn’t an option, however the prices of the tours were quite extravagant and I was almost thinking that we would just have to miss it altogether.

So we were sitting in a cafe in Fes drinking Moroccan Tea when we happened to get talking to a couple of young girls that had just done a 3 day tour and were raving about it in such emphatic tones, that my interest was piqued again. It just so happened another guy walked into the cafe and said he had booked online at Viator the cheapest tour he could find which was $180 US and so as soon as we got back to our Riad, the search was on.

Having travelled for the last 6 months everywhere with no issues, I hadn’t alerted our bank that we were in Morocco so having found the cheap deal, downloaded the special discount coupon and got to the payment part, we discovered that our bank had blocked our card. Bit of a pain but also great that they had our backs like that.

To cut a long story short, the tour guide offered for us to pay in cash sending us an email to say he would pick us up tomorrow morning. So there we were waiting for the pick up at 8am outside our Riad thinking “Well if we get picked up it’s a bonus”. Next minute a passenger vehicle with all four wheels and in pretty decent condition arrived, opened the door and we piled inside.

Having booked the cheapest tour available and to be honest it was considerably cheaper than anything else offered, we were expecting a van full of teenagers however to our surprise we were all older. We were off to a good start.

For our first morning we drove to from Fes to the mountain town of Ifrane, known as the Swiss Alps of Morocco. It was such a shock to see such a place existed with wooden chalets and tree lined streets and quite upmarket cafes and shops. It was very cold however with ice everywhere. Again the contradiction of Morocco continues.

The first day was mostly about the driving through villages and mountain passes stopping for lunch along the way before continuing on at a great rate of knots. At one point we passed by a police checkpoint and our guide warned us to put our seat belts on. He needn’t have bothered.

The scenery is spectacular and varied from areas of dry red clay to rocky mountains and then greener areas filled with date trees and other growing crops. Then somewhere out of the rubble, dust and rocks villages appear, sometimes even affluent towns with footpaths and street lighting. There are lots of developing areas where large areas for subdivisions have been cleared with the services installed just no housing. It’s quite amusing to see footpaths that lead to nowhere.

All across the landscape are Nomads just moving across the land with their families and stock, moving south for winter. According to our guide sheep and goats are the favoured animal to keep because they provide wool, skin, meat and milk and they will graze on anything. Cows on the other hand require too much feeding and there is simply no grass to graze on. Little girls sit in the rocks watching their animals, women walk by with babies tied to their backs and men ride past on their donkeys on the way back from the well carrying the days water supply.

It’s a long days travel with good company and we arrive in the desert to change vehicles at around 5pm. I think the 4×4 is really just for show as we transfer to our hotel at the start of the dunes. With a very vague itinerary we are unsure what to expect. I had read that we would spend the first night in the hotel before riding the camels out to our tents in the desert the next day. However we are bundled onto our Camels the moment we arrive to head out to the tents before sunset.

So this is us riding through The Sahara Desert on Camels. Pretty crazy stuff. 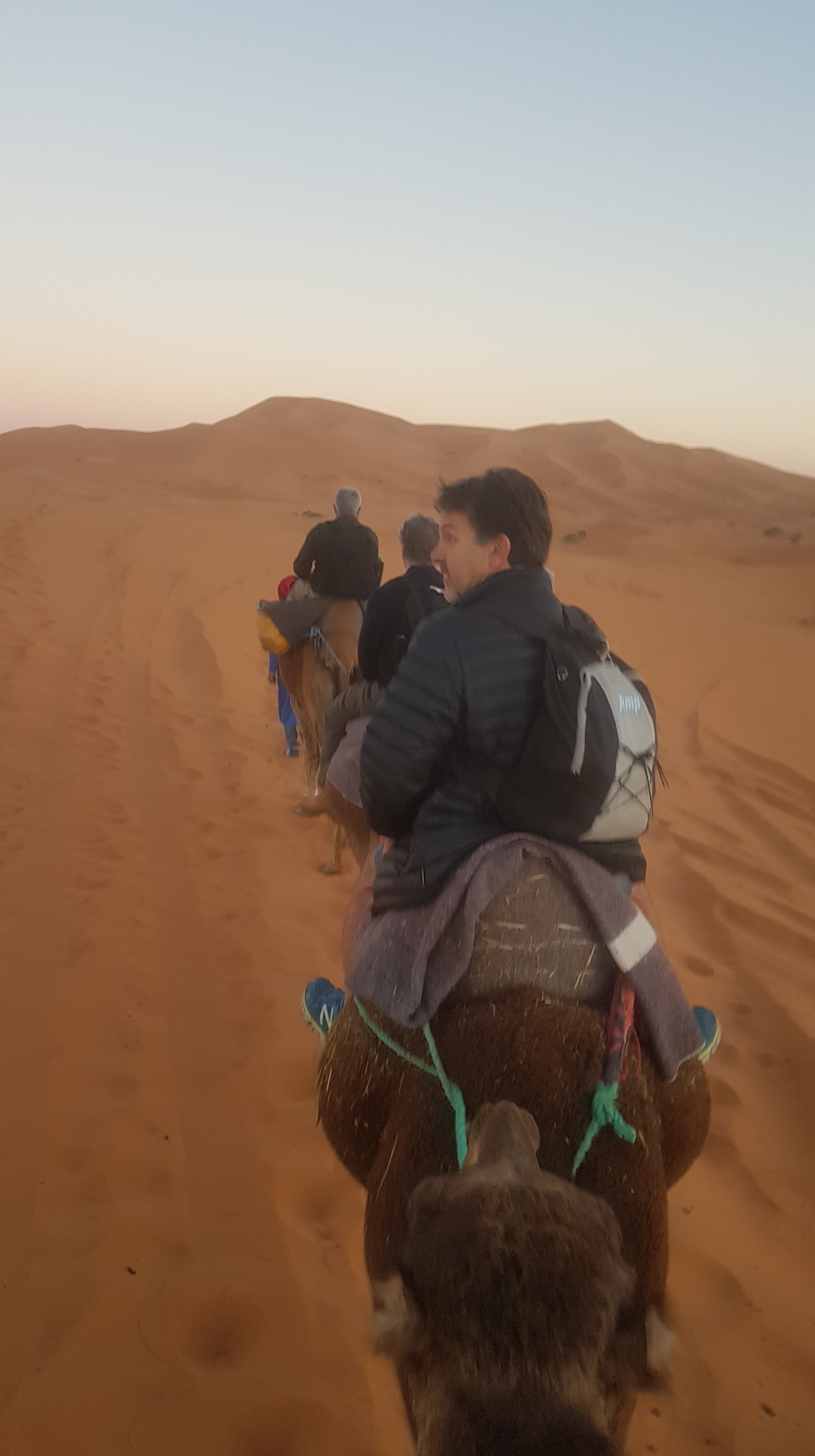 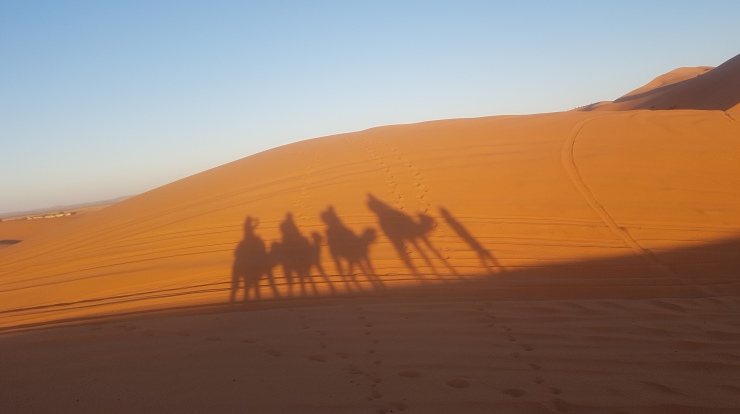 We arrive to the tents, it’s more of a blanket fort like the kind we made as kids, just as the sun goes behind the dunes and it’s a beautiful sight.

Once the sun disappears the desert is a cold place so we are grateful for a fire before a gorgeous dinner of moroccan tagine and soup – of course. So we all sit around the fire for our meet and greet and it’s so interesting to meet people from completely different cultures. We have one girl from Kazakhstan. The night ends with local music and a bit of desert dancing, before heading to our blanket forts and our mountain of blankets which are very welcomed as it’s extremely cold and our feet just refuse to warm up. 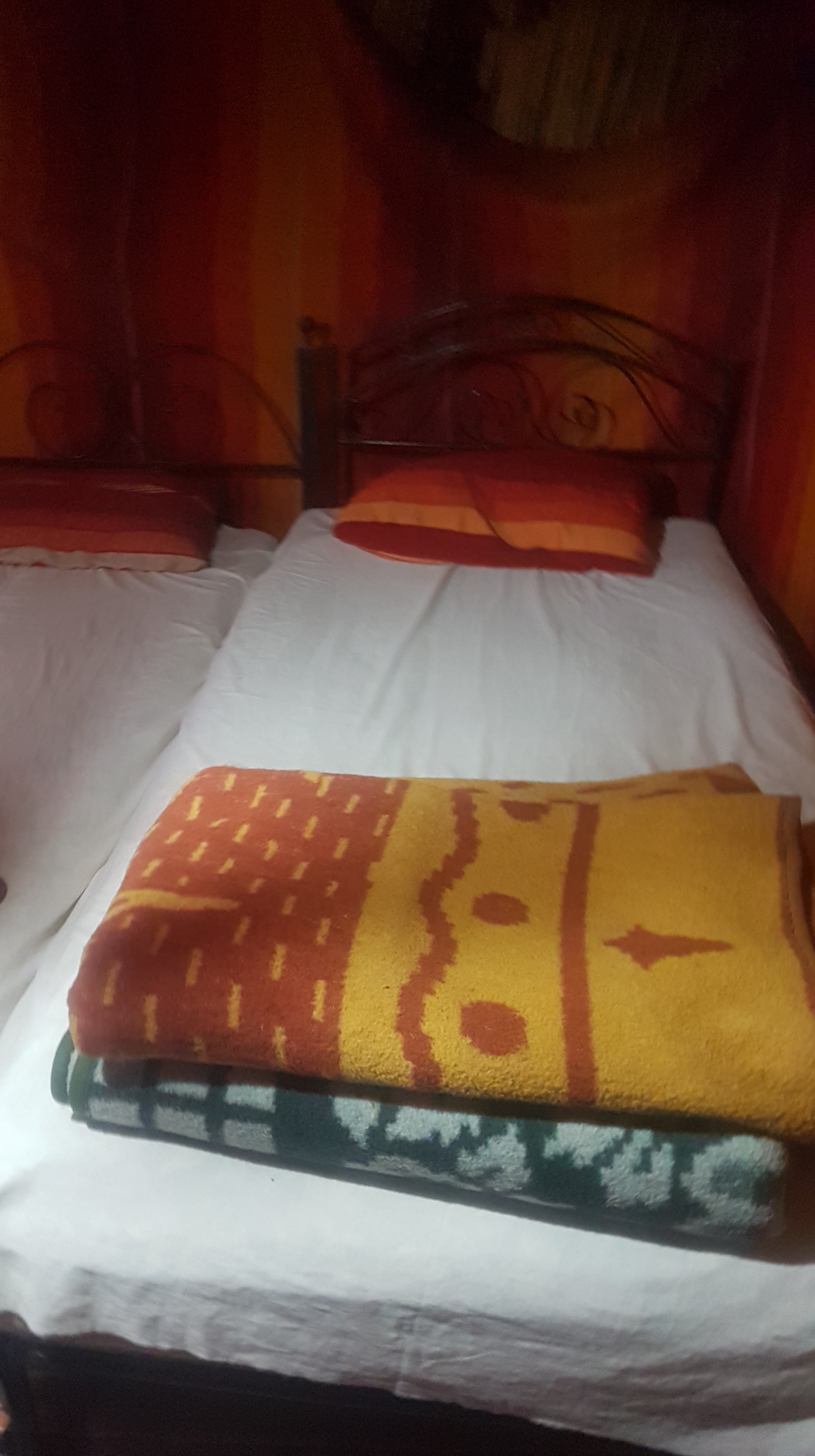 We wake in the morning to the sound of Camels outside our tent. We are off before we have even wiped the sleep from our eyes. Apparently we are riding to a sand dune before sunrise. 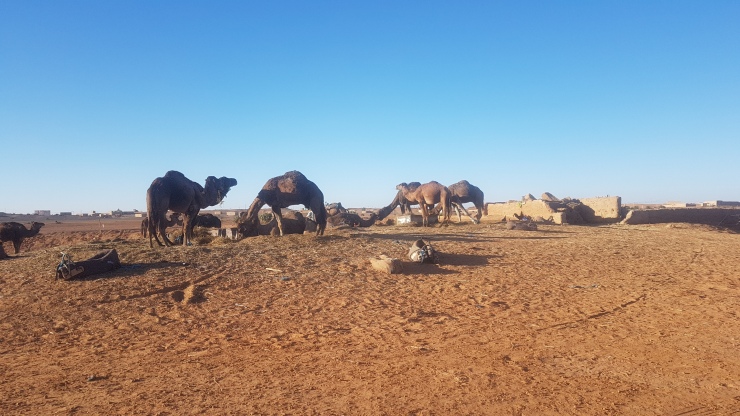 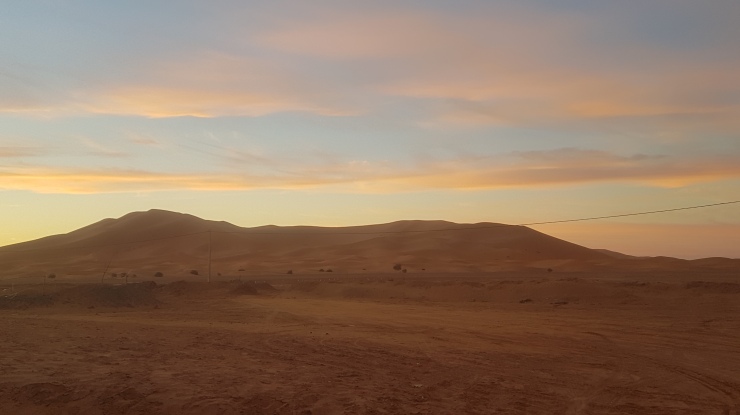 This is the part where things get a little confusing. We arrive back to the hotel and have the traditional breakfast of bread and jam before being bundled into the 4×4 for a tour of a local village. No there is no time to wash the sand from my hair or even brush my teeth.

The town is Risoni and according to our guide, a very important place in African history. It was the original gateway into Africa and has very royal connections however I have to say it felt like it’s crown has faded. It’s a little more rugged than we have experienced.

We are taken to the four different markets that exist in the town. One is the Nomad market which consists of animals – mostly goats and sheep. We are also given a lesson in how to recognise the different cultures. The Arab women wear black, closed faces if they are married, open if they are not. The Berber ladies wear black with a different embroidery to show which family they are from, the Nomad women wear colours and The Twhali women wear blue. One broach means single, two means married. It’s all designed so that no questions to a women’s status are asked as it is considered rude.

We are taken to the Berber market which is purposely understated to maintain its originality we are told. It’s full of vegetables and spices.

Another lesson we learn is about marriage. If a boy likes a girl he informs her family. If they like the boy they will send a photo of the girl to his family. If the girl accepts the boy she sends her C.V that she has been writing since childhood on what she requires of a husband. Things like only 1 wife or he can’t live with his family after marriage. Basically the same rules apply the world over, the boy wants a pretty girl, the girl thinks more with her brain about what she wants.

It’s a very interesting tour in a town where shoes are soled with tyres and there is a date market with hundreds of varieties of dates sold.

Finally we head down quite a dubious street to eat when I feel all kinds of excuses about why I am not hungry start to formulate in my mind. Turns out we head to a terrace upbove with the most beautiful interior and beautiful food and it’s a lovely end to our tour.

From here we headed on back to our desert hotel where we finally showered and lounged around in the sun for the rest of the afternoon before another sumptuous Moroccan styled dinner and more African beating drums.

Luckily for us we scored the best room it appeared with hot running water, a door key and lock and all light fixtures and even though we couldn’t find the heat pump control we felt fairly blessed with all the other things.

After a better or should I say warmer nights sleep, we arose to a beautiful sunrise over the surrounding sand dunes and breakfasted on more bread and jam. After Morocco I may never eat bread and jam again. Even though it was a budget trip and our expectations were low, the trip has been more than we had hoped for however we felt that the communication side of things could have been vastly improved. It really was a mystery tour because from one moment to the next we had no idea what was happening. That included our last day, how we were getting back to Marrekech and even what time. Turns out it was by local taxi van and it was the longest day known to man.

By the time we arrived back in Marrakech we both had the most blazing of headaches and so our last night in Morocco was spent heading straight to bed. The trip was amazing but the travelling was just too long.

The next morning we awoke to the unbearable story of the two backpackers killed in the Imlil mountains where we were only a few days ago sipping tea in Mohammed’s house. It was so sad and dreadful for all concerned but we also felt for people like Mohammed who had tried so hard to get an education later in life to bring tourism to the area to make life better for his family. We are not talking rich here either just providing the necessities that we all take for granted.

We also had our credit card scammed in Morocco which we discovered in Vietnam when we couldn’t pay for our hotel so again the contradictions of feelings towards Morocco continue.